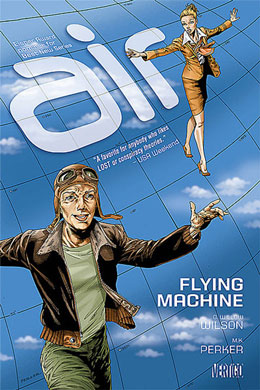 I don’t think the second volume was as strong as the first. It was good. I think I have a lot invested in the character of Blythe, and this volume explored more about the lives of the other characters through Blythe.

Logically, Amelia’s the first one who’s story is told. Her history is also interwoven within the discovery and first modern use of the hyperprax device. Amelia’s story serves as a warning for Blythe. Amelia became lost on the edge of the world or reality — or perhaps the edge of the page. And she lost both her flying partner and 46 years. Luckily without aging.

And likewise, Blythe looses it. First, she almost crashes the plane when she freaks out like a new driver might on the road.

Turns out Zayn’s from Saudi Arabia, raised Muslim, and sent off to boarding school in Boston. And he’s possibly a terrorist. Or at least it’s rather confusing even to Blythe who’s living his life moment by moment to tell if he’s working with a terrorist organization. when Blythe’s finally pulled away, she seems to think he might be.

And he has the other hyperprax device and she’s going to set him up. Plus, Blythe now knows how to control the device a lot better.

In this break, Wilson goes back to her strength, which is writing Blythe. I even feel the art goes up a notch here. Blythe genuinely likes to help people. Here she finds a flight for a Russian ballet dancer who’s a bit of a primadonna. And she reunites a long-lost couple separated due to war and no doubt, she draws parallels between them and her own relationship with Zayn.

With the reveal that Zayn’s a good guy. A good guy working for Interpool. And Blythe naturally feels like an ass for questioning him.

Then Wilson delves into the origins of the hyperprax device. It comes from an Age of Prophecy, when things existed on the Earth that don’t currently exist. It’s certainly a great idea, but I’m not sure how well it’s executed. It doesn’t flow into the story the way it should.

Overall, this is still entertaining and I’ll definitely be picking up the third trade.