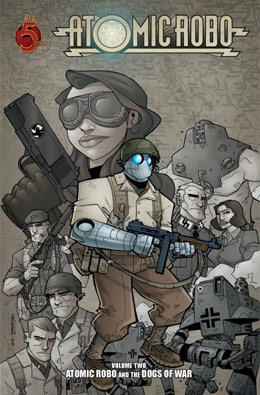 Atomic Robo (Vol 2): “Atomic Robo and the Dogs of War” by Brian Clevinger and Scott Wegener

Atomic Robo made me cry. Actually, the introduction by the author and the artist made me cry. Atomic Robo certainly hits on the trend of people my age being fascinated with the between World Wars era and World War II. Plus, it carries some clear steam-punk sensibilities in Robo’s design and some of the monsters he fights. But I think what Clevinger and Wegener hit on in the introductions is something critics of our fascination miss: our relationship with our grandparents, who lived during that time. We were the “latch key” kids of Baby Boomers, who spent a lot of time with grandma and grandpa. (Perhaps even more than our own parents did with theirs as they grew up when Western peoples immigrated or moved across country.) Atomic Robo is a tribute to our grandfathers: of the good things and the humor. People die, but Atomic Robo isn’t here to remind us about the horrors of the war — except perhaps the steam-punk horror inserted into Robo’s villains — but celebrates the best war stories where the good guys win and the bad guys lose. It helps that Atomic Robo’s bulletproof.

Similarly, “Atomic Robo and the Dogs of War” celebrates the roots of comic books, which made their appearance in popular culture right around World War II. Robo is the same kind of hero as Captain America: brave, brash, and going against the evil supernatural tech plots of Nazis. Of course, what’s different is Robo’s sense of humor and his refusal to accept having a nemesis. In this book, we only see the shadows of Dr. Helsingard, Robo’s self-named adversary. Likewise, the ending where Robo won’t kill Skorzeny really fits how Robo doesn’t kill villains when they aren’t doing anything wrong.

I thought the opening story of Robo against Skorzeny’s robot-tanks went on for longer than it needed to be and was a little slower-paced than other Robo stories. While it’s certainly fun to have a Nazi beat-down, it drags on a bit. Nazi’s are the “safe” villain, so it’s easy to write and illustrate them getting their asses handed to them by the Allies.

My favorite story was Sparrow and Robo’s accidental team-up. I always love a story with a switch-a-roo where the heroes mistake each other for the bad guy, but then realize their mistake and go after the bad guys together. One thing I appreciated about this story was Robo being temporarily shorted out in the fight. In every story before, Robo has been so smash-and-win; this provided a moment for Robo to be vulnerable. And most importantly, he relays on Sparrow on save him.

The addition of Sparrow (and Vanadis) nicely add women to the World War II story. So many of these tales are men’s tales as women weren’t (and still aren’t) allowed on the front-lines. Robo is certainly a front-lines guy, and they certainly weren’t going to give Robo a love interest or a nurse.

The “letter” at the very end from Tesla nicely tied up the story. It gives all the explanations the reader needs so we’re not wondering why humanity’s technology isn’t further advanced. And it gives a nice lead-in to the next Atomic Robo story-ach.

Atomic Robo is an awesome comic, and I highly recommend it to anyone looking for a fun story. I’m really glad I have this in trade with all the extra goodies in the back.