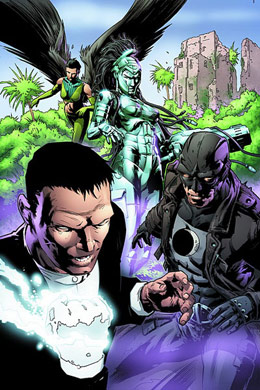 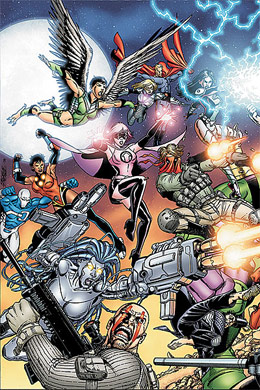 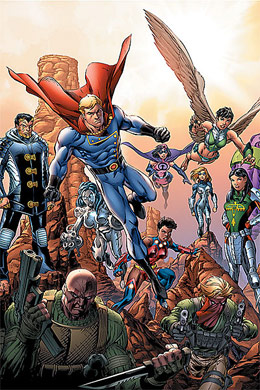 I’ll admit that I’m probably only giving this comic five stars because I’m elated at the return of Apollo. Please, please, now give him a more active plot. I got a little hope from Gaia calling him a Sun God and him being the one she reached out to first.

I’m glad neither Abnett or Lanning shy away from showing Midnighter and Apollo as a couple and refer to Jenny as their daughter. (Unlike some other authors I won’t mention.)

Anyway, besides that, I liked the team rescue of Midnighter. Especially the part about him being surprised to see them. Also that they showed up way more quickly than it took Midnighter to travel there. (Of course, who’s watching the Carrier? Maybe Angie’s double?) Swift carrying off Habib was great. As was Jack being all confused when Gaia stood up.

The rehabilitation of Habib could definitely be an interesting plotline. Something contrasting with the rebuilding of the Carrier.

I don’t know how I feel about this reboot. I was disappointed to see Abnett and Lanning leave the title because they’d really knocked the last few issues out of the park. They were telling a good story. And okay, I’ll give the two new writers the benefit of the doubt that they’ll know what to do with the title.

I like that this idea of the carrier leaving to find its home is something they grabbed from a throw-away Ellis line. I liked the self-knowledge humor of asking if this wasn’t another Bendix-trap lying in wait. (Dude, if it does turn into a Bendix-plot, I’m going to be really pissed.)

However, I wonder if:

A) This is a viable story run. The Carrier seems to be on cruise-control so there’s no stopping for wacky space-time fun. (Though I suppose we have the way back.) I also don’t wonder if this is somewhat of the reversed POV plot of Star Trek: The Motion Picture, which is infamously boring, or Bernardin and Freeman writing what they wanted Battlestar Galactica (2003) to be. The latter largely influenced by the very big human population on board and having to save their planet.

B) Sustaining the popularity of the title without Midnighter (and Apollo) on board. I get the logic of Apollo having to stay behind and Midnighter not wanting to go without him. However, Midnighter is the most popular Authority member, and there’s a reason why Marvel puts Wolverine in everything. Not that I think from a storytelling/writing perspective this is a good thing. But from a selling point, it works. (Personally, Midnighter’s my favorite so I’ll miss him.)

I do have to say: Thank god someone finally cut Apollo’s hair. It was about time.

Yeah, leaving Earth without doubly making sure that Angie was on board was a bad idea. Of course, this issue made it pretty clear that not only was the leave off Earth in a hast, but no one planned who was going to lead. Yeah, neither Jack nor Christine are really used to be told what to do these days. Maybe a long time ago when they first met. But not anymore.

I had a bit of a hard time following the plot. I only know so many characters outside the Authority in the Wildstorm universe, and I read this issue after Jason, who reads almost everything, went to bed for the night.

Though the authors seem to be setting it up as the Carrier eating/using people to run it’s systems. Makes sense since it doesn’t have the baby universe anymore. However, that makes it ethically complicated.

Despite the Authority having taken over a government, one thing the superheros have never been good at is working with/pleasing the normal people. They care, but they don’t care enough about the individual. This is going to be a problem when trying to sustain an entire human population on the Carrier.

I wonder who Jack’s keeping behind that door. Habib is the logical guess; though he’d be more useful on Earth.