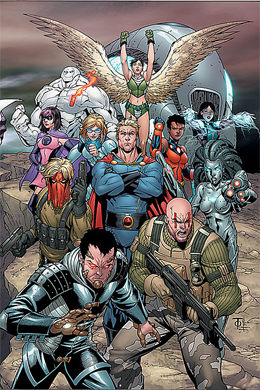 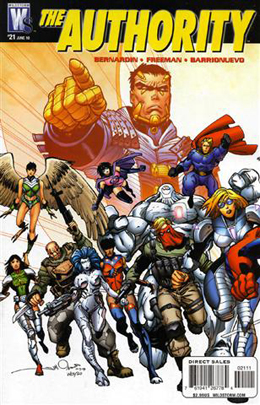 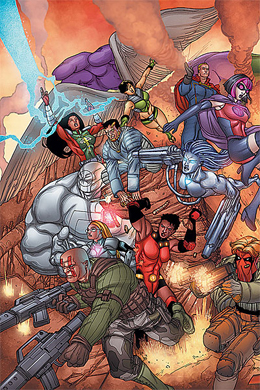 I liked this issue more than I expected to, especially since I’m only attached to part of the characters.

I thought the reveal of the High being alive and on board — also aware of what he did — and the reveal of River as the Spirit of the 21st Century (good thing Apollo and Midnighter weren’t aboard) were really well done. As we learned with the Doctor, when one spirit dies, another takes its place. The High as protector for his redemption works really well, and I’m interested to know more about River’s background.

The fight scenes were well-done and paced. Sometimes Barrionuevo nails the characters’ faces, and other times, I feel there’s a need for refinement. However, my biggest complain remains that he needs to give Swift some pants.

If Jack and Christine want to remain in charge of the population on the Carrier, they better resolve their leadership struggle stat. Otherwise, the other post-humans are going to take control. Or a riotous human population. Of course, it’s always good to have Angie back. She may be just what they need.

While Freeman and Bernardin did an excellent job with the High and River, I do think they’re lacking in connecting with the other established characters.

I really had mixed feelings about this. And they mostly stem from two places:

1) I felt the issue really came together. They’re on an unknown mission in space. The new Authority teams works together more smoothly. Jack and Christine compliment each other more than they have in previous issues. Plus, there’s a feel to what life’s like on the Carrier. From the High and young River to Deathblow and Grifter’s jobs. I find it really fascinating that the High’s choosing a human life, choosing to die.

2) I’m super conflicted about what they did to Angie. On one hand, it’s cool to see Angie at her full power potential. On the other hand, Freeman and Bernardin have essentially erased all of Angie’s personality. She doesn’t exist. She isn’t human, and she doesn’t need her human connections. While she may reach out to take care of the human population aboard the Carrier, I don’t think she has real compassion from them. The beds are just another job; just another program that the Carrier must put out. They killed Angie without killing her. This pisses me off. I feel for Jack.

New writer and new art team: I’m not sure what I think about them yet. Apparently, Taylor’s doing a 4-issue arch, which probably means that wherever the Carrier’s heading won’t happen at least for a little while.

One thing I did like about this issue was it really had a sense of how small the Carrier is. It brought reality to the situation of Carrier living. The Night Tribes gave a horror. Even against the Post-Humans, they certainly would win en-mass.

The entire situation very well highlighted Angie’s change. She’s no longer human. Oh, how I miss Angie and so does poor Shen.

Speaking of Shen, can we cover her backside? Perhaps another pair of pants, please. While I liked Miller’s art better in general than Barrionuevo’s, I do think Shen’s butt needs covering and there needs to be less O-faces.

On the sexy side, I was good with Flint taking charge and carrying off Grifter to have sex with him.

I’m really happy with John taking back his powers. I figured it would be to save River, and I’m looking forward to Jack taking out whomever he’s gotten stored in that box.