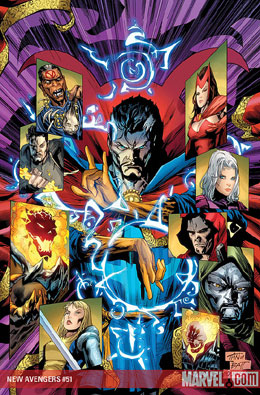 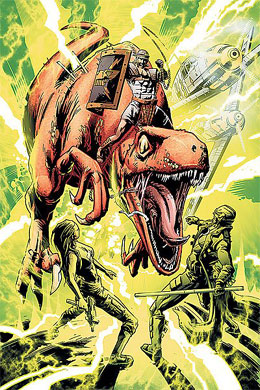 It feels great to be excited about The New Avengers again. Great to want to read the next issue now please. I really like how Bendis writes Dr. Strange. Too many writers make him too ethereal and mysterious, but to Bendis, Strange is a really smart guy who has really cool magic powers. However, even the Sorcerer Supreme can make mistakes and be beaten. Secretly (or not so), I’m cheering for Wiccan or Nico Minoru as the next Sorcerer Supreme.

The Authority Vol 5 #9 by Dan Abnett and Andy Lanning

Conceptually, this villain is interesting. (Love, love when the Authority fight villains who aren’t Henry Bendix in books written post-Revolution.) In practicality and with everything else that’s going on in the World’s End story, it seems to be a side narrative that doesn’t fit well. Plus, the comic felt too much action and shorted for the preview and the Team Achilles story. (Though Team Achilles rocks. Just read their short and controversial run.)

Jack healing is definitely a good sign. Though still wondering when they’ll be getting back to whatever happened with Apollo.

In my opinion, there is no other She-Hulk beside Jen Walters. However, she seems to be dealing with not one, but two other Hulk-powered women being called She-Hulk by Marvel. (I never wanted to be sucked into Ultimates anyway.)

I picked up this issue because 1) it has Jen Walters in it and 2) it’s written by Fred Van Lente, who won me over with another story about a young girl named Kitty Pryde and some hairy Canadian. Van Lente didn’t fail to disappoint me. He sets up Lyra coming to the main Marvel universe in order to solve her people’s fertility problem, but still being a young women. And it’s like these writers know I’m a sucker for stories where stubborn “special” heroines save the world. (I’m looking at you, Buffy Summers, Donna Noble, and Lyra Silvertongue, the not-namesake of this Lyra, among others.) I think Lyra has a great big bunch of potential to be a brainy and brawny superheroine.