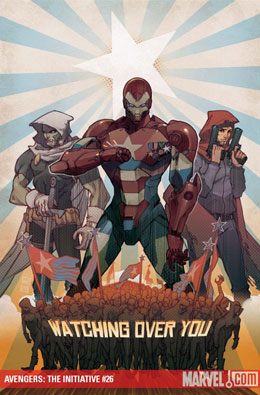 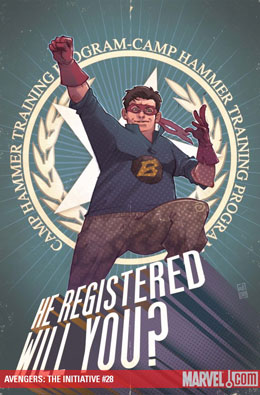 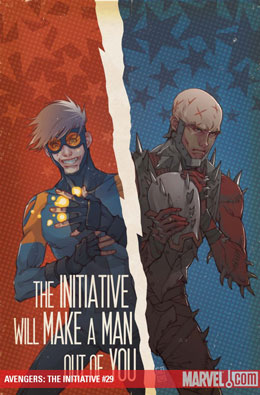 Avengers: The Initiative #26 by Christo Gage

I can’t help but think how much darker this comic has gotten since Slott left. Not that it wasn’t “dark” when Slott was around, it just had a different feel. And as H.A.M.M.E.R.’s taken over, it seems like there’s more characters than there’s ever been and it’s really diluting the story. I don’t know if it’s Gage’s plots being overly ambitious or if it’s an editorial mandate to make sure Osborn’s team is in every book.

The Hood snarking at Vampio for not being a real vampire and then eating him was brilliant.

I can’t help but wonder if all the new characters with less useful powers lining up to go to 42, the prison the Negative Zone, is Gage’s way of thinning the herd. Not that they can kill Butterball, who’s rather this century’s Rick Jones, if a little more endearing.

I’m just hoping someone offs Slapstick. Just waiting for the Gauntlet to regain his memories or figure it out. And for Tigra’s maternity uniform’s debut. Also more Taskmaster.

Avengers: The Initiative #28 by Christo Gage

This comic really has it’s ups-and-downs. And it still needs more Taskmaster.

This issue was a lot of set-up to what’s going to be the next plotline: going after the rogue initiatives. Avengers Resistance. One thing this comic really has going for it is continuing to show the real consequences of war. There were defections on both sides. Komodo’s departure doesn’t surprise me. (Though I hope she gets her powers back and is used later in continuity.) I wouldn’t be surprised if Cloud 9 also goes AWOL. And it’s always a good reflection to have some of the good guys pack their bags too. Even if you’re on the side of justice, puppies, and rainbows, fighting every day has to be draining.

Justice and Ultragirl’s little relationship talk didn’t do much for me in the way of character development. I think there are so many other plot threads which are way more interesting than who’s sleeping with whom. Except when it ends in half-tiger and half-Skrull babies.

Butterball as Joe the Superhero. Hilarious.

Avengers: The Initiative #29 by Christo Gage

My favorite part of this comic was when Speedball-Penance got Hairball back. Maybe I’m just a sucker for animal stories, but this has been my favorite recent plot twist. I’m not quite sure if Trauma knew; but he does want to actually help Penance, and he does do his homework.

I also enjoyed Taskmaster knowing that the Hood doesn’t have all the power he used to. Taskmaster is such a nice morally ambiguous character.

Sounds like Cloud 9 will be having more plots. Yay. But boo, if she ends up as the fall girl.