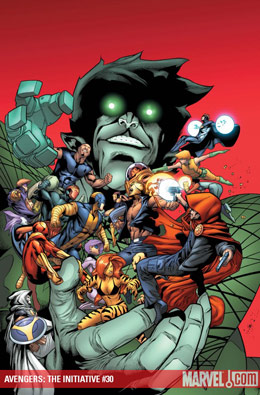 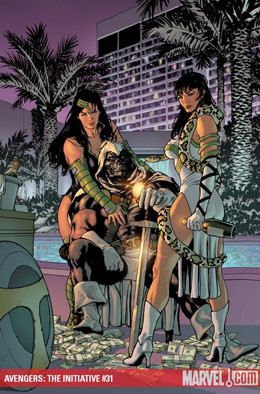 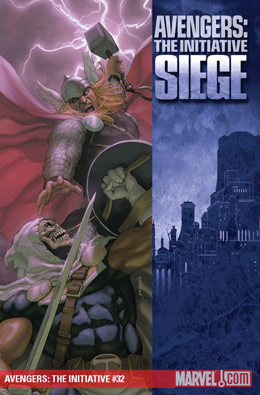 Avengers: The Initiative #30 by Christos Gage

Does this mean Trauma is going to the Brother Voodoo comic? Dammit.

I did think for the ultimate evil, Nightmare was a little too easily subdued. Though the backstory on Trauma’s birth and what really happened with his family was most excellent. In that respect, this felt like another good issue in this series.

Yes, Taskmaster is going to be in the charge of Camp Hammond. Awesome socks. I loved him snarking away the Hood who didn’t really want to deal with them.

I was happy that Trauma found Hairball on purpose for Penance, and that Penance is going to rise above everything that happened at Stamford. Even if he wasn’t ready to deal with his teammates.

When is Tigra going to start showing and stop wearing her bikini?

Avengers: The Initiative #31 by Christos Gage

Poor Taskmaster. You have to give it to him that he knows he’s going to get his ass handed to him one way or another. Considering all the big guys he’s beaten in the past, knocking his ego down in a fight was probably the only way Norman could get him under his thumb.

The cleaning up of Camp H.A.M.M.E.R. was nicely ridiculous. Reminds me of cleaning up college dorms right before parents’ weekend. Penance and Taskmaster’s conversation was excellent in how reluctant of a leader Taskmaster is.

Constrictor’s redemption path has been nicely underplayed. His romance with Diamondback being the tipping point works nicely; I like the positive reinforcement of her affect on his life (and hey, writers, she’s still alive to boot).

I loved Taskmaster just going for it when asked about his opinions of how to improve the Initiative when confronted by Osborn. Of course, bringing in the young and impressionable was Skrully Pym’s idea. And it worked well. Which means this book is going to be getting back to what it does best.

Taskmaster’s letter to Constrictor was priceless.

Avengers: The Initiative #32 by Christos Gage

Gage and company have been doing a great job with these last few issues. Taking Taskmaster’s POV has helped tighten up the comics. It’s interesting to see how Taskmaster’s ambition is getting the better of him lately. Though we don’t know if he’s truly a bad or good guy. He was just out for money. But now, Taskmaster wants something more, he wants notoriety.

I also appreciate Diamondback’s POV. It adds a lacking feminine voice in the Initiative, and she’s bending her morals the opposite way of Taskmaster. He’s becoming more good and she’s becoming worse. Constrictor certainly is no Steve Rogers. Not many men are.

Gage also does an excellent job with the battle. Showing bits of the battle versus the entire thing always works better. Especially in super crossovers when I’m not reading the main title.

I think everyone standing around Thor’s “dead” body shocked by the horror. Diamondback and Taskmaster a little more than the others.