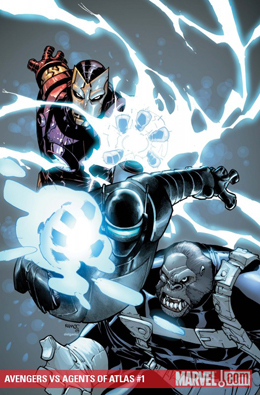 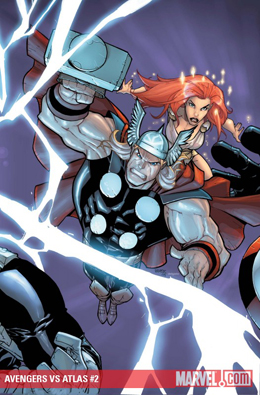 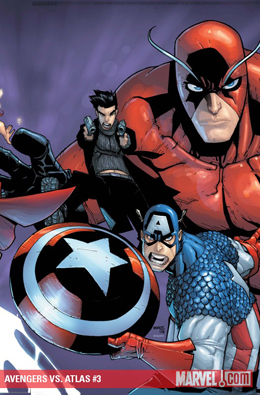 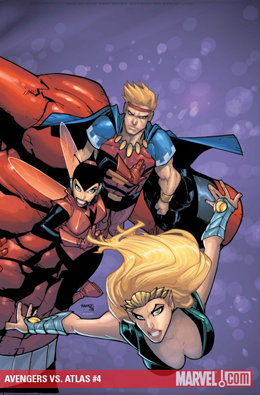 Avengers vs Atlas #1 by Jeff Parker

Except for the awful cover, this issue was awesome. I love Agents of Atlas so much, and that their mission to take down the evils of Atlas has finally broke into the main Marvel universe. Or, you know, something the Avengers have to clean up.

I can tell Parker is being a total fanboy here. I don’t doubt all these villains are dragged up from very old comics.

Defender of the Deep by Jeff Parker

I loved the back-up story. You can definitely tell Parker’s opinion about the Sea Shepherd. (I agree. Go living whales. I mean, seriously, have these whalers never seen Star Trek IV: The Voyage Home. You know what happens when you kill all the whales? Kirk and crew have to go back in time to save your children’s children’s asses. Required school viewing, seriously.) Namora punching the ships was awesome.

Avengers vs Atlas #2 by Jeff Parker

I think classic Avengers’ stories are hard to do. So many have already been done, and I think the team itself is rather dated to that era. Plus, there’s only so much drama modern readers can get from them hiding their secret identities from one another. Which while I enjoyed how Parker played with that — particularly knowing Tony Stark’s — I don’t think it creates the same tension it did in the ’70s.

I did love Bob fucking with their minds. Particularly when he put Bucky’s head on M-11’s body against Captain America. I also loved the part where the Avengers can’t find Thor and want to know who this puny Donald Blake is.

I’m now waiting to see how this chaos monster relates directly back to Atlas.

I enjoyed how this story took elements of Japanese culture and pushed it. Of course, the sushi chef knows martial arts and tries to kill Jimmy with his knife. And there’s a giant tentacled monster in the back causing all the problems.

Then there’s Mr. Lao and his strange delicacies he goes to ridiculous lengths to find. Silly and fun. Plus, it’s nice to see Jimmy on his own.

Avengers vs Atlas #3 by Jeff Parker

This was definitely my favorite issue so far. Minus the awful, awful cover art. I felt Parker’s writing really shining through as the classic Avengers worked together with Atlas. I totally clapped my hands when Captain America said, “Avengers and Atlas Assemble.” Hearts.

I always love classic Hulk scenes where he yells at them that he gets stronger with every anger-causing blow and they keep punching him. Or in Hank and Ken’s case, drop a big rock on Hulk. Though any time, M-11 gets to use his death ray, I’m completely behind that. Of course, thankfully, Venus woke up in time to save the day by calming the Hulk with her singing. She really does have a thing about hooking Namora up with the strong hero type Namora likes.

I’ve been pretty amused by the “oh, you’re so-and-so” as the classic Avengers still don’t know everyone’s secret identity. Atlas is just like “yeah, whatever, Bruce Banner is the Hulk.”

I loved Tony snarking about how Bob could’ve put his knowledge into Tony’s head instead of Hank’s because he’s just as smart. Also Ken “spoiling” Bob for his future.

M-11 and his constant computer hacking does put him in bigger contendership for my favorite Atlas character.

This story is simply adorable. (It almost makes me forgive Cornell for those episodes of Doctor Who where the Doctor treats Martha like crap and falls in love with the nice white lady.) Overall, it’s a really hilarious and lighthearted critique of the Marvel-verse.

Yes, Venus is right, almost all men should shave. And Deadpool is always gross and inappropriate.

Was Cornell ripping on Millar’s Old Man Logan Hulk and She-Hulk incest here? (Not I did not read that awful comic, just heard about it from my Wolverine-obsessed boyfriend.) I think it could’ve been better with a reference to how 26 states in the U.S. allow for first cousin marriages.

Kirk’s art is cute most of the way through, only to get too T&A on the last panel. Super frock, we get it.

Avengers vs Atlas #4 by Jeff Parker

Figures that the entire thing would be a problem with Pym. Oh, Hank Pym, you have manpain beyond manpain. Wow.

I love how this story highlights Jan as a hero. I loved that. I love seeing her knowingly going into the future, knowing that she dies in the future. Yeah, from the early Avengers years, Jan has some time. She has a lot of time. But she will die someday and she knows that. However, saving the universe is more important. Here Parker writes to his strengths of being reverent to older, iconic characters. As Jan cries, I cry with her.

My Dinner with Gorilla Man by Jason Aaron

This seems like an Aaron comic. It’s much darker, or at least lacks the humor of where Parker might go with this type of story. I think it’s in Ken’s background to have killed all these people who came after the gorilla legend.

I loved the ending with him and Jimmy walking down the hallway, full of trophies from those who’ve tried to end Ken’s life and become the Gorilla Man themselves.