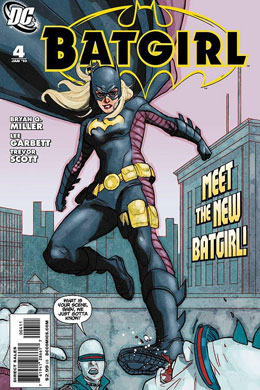 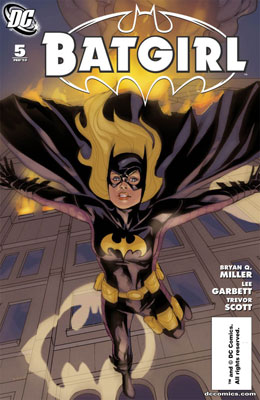 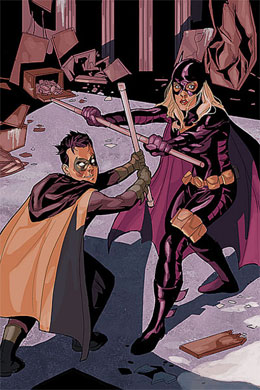 I love the comparison and contrast of how your first days in college and nights on the job are the hardest to adjust to. Sleep definitely becomes scarce.

The scene with Stephanie returning the purse and the little girl looking up to her was right on. Stephanie deserves to be a hero both on paper and in the DCU.

Stephanie flirting with the cop has been a nice touch. As does him making fun of Jim’s relationship with Batman and how no one questions it anymore.

Babs’ plot with Wendy Harris is interesting. Seriously, after reading Wendy’s bio on Wikipedia, she’s a tossed around character who deserves a better life. Paralyzed by Wonder Dog as it killed her brother while they were playing janitors to the JSA, talk about being taken for granted and refrigerated. Hopefully, she’ll find some redemption in this comic.

I really loved this issue. I thought the script pulled together nicely and the art fit it so well.

The opening fight scene of Stephanie taking on Diesel was perfect. I loved how it showed how much she and Babs have the same sensibilities and sense of humor. Stephanie’s quips were right on. It wasn’t her fault Diesel didn’t get them.

I loved, loved when Batman and Robin showed up and Diesel was super excited to fight a “real” hero. I also loved Stephanie saving the day by freezing Robin. And having Dick kick them out of the cave. (How awesome was it that Alfred gave Babs and Stephanie permission to use the Bat Cave, not Dick or Damien.) But seriously, Damien messed up first by just going in headstrong, because he’s a child which Miller seems to remember. Stephanie may have not saved all of them in the most graceful manner, but she did stop Diesel and stop the building from exploding.

Alfred is so sick of taking care of spoiled children. I loved his comment about taking away Damien’s knives.

Stephanie is so not stealthy when ease-dropping on Francisco Gracia. She is kind of lucky he gives her leeway. Probably because she’s a woman.

I loved Babs being setup Detective Nick. Of course, I hope this doesn’t cause conflict between Stephanie and Babs later. I can do without the women fighting over the man plot. Especially since this comic has been so good. I loved him just sticking his foot in his mouth about Babs’ disability and her calling him on it. Of course, she was still pissed at Dick. But when is she not?

I loved the art and the scene with Damien stalking Stephanie like the kid in The Omen. Hilarious. I love him in his “urban camouflage mode.” While drawing a stick figure of her as Batgirl and how he’s going to stab her. And then acting like a little boy. 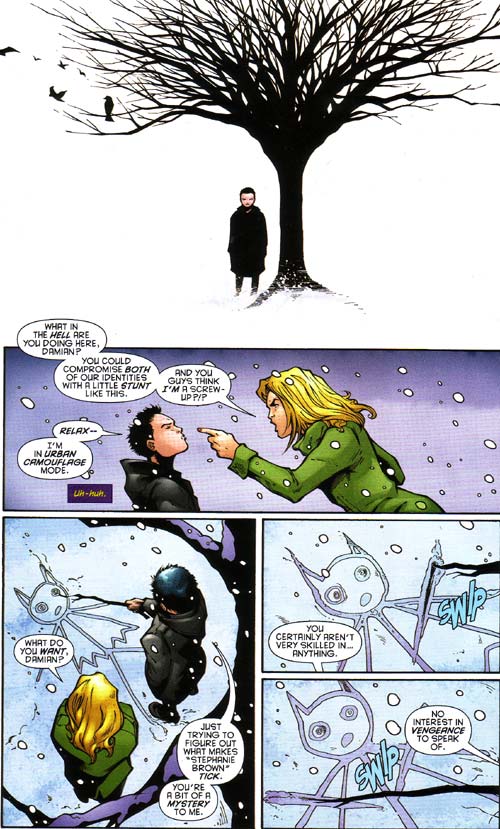 Stephanie dressing up to surprise Fransisco is going to get her cover blown. And shot.

Of course, Stephanie wasn’t seriously injured. I do like her dilemma of being taken to her mother’s hospital. She really does need to be more careful as I’m sure her mother will think its suspect that a woman mysteriously matching Stephanie’s description disappeared into the night. Mothers always know.

Stephanie versus Damien still proves to be incredibly entertaining. I love Damien not knowing the Karate Kid references, because Damien wasn’t raised in America and he’s 10. Most 10-year-old Americans probably don’t know the iconic movie as its 25-years-old.

While Batman giving a time out to Damien and Stephanie was funny, it didn’t really work for me. Stephanie is just too old to be treated like that much of a child. It seemed to serve Damien’s storyline better.

I’m glad to see that Babs and Dick grossed out on their “remember when there was another Batgirl and Robin sparring…” line. Because yeah, ick.

The rest of the story kind of lose me in those final pages. Too much set-up.