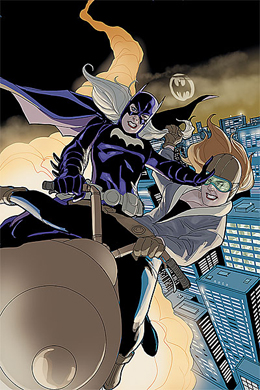 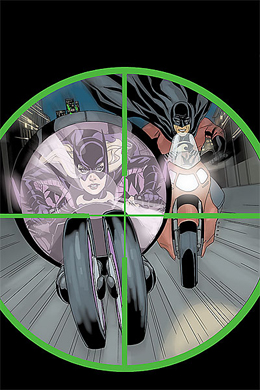 This issue’s a very nice conclusion to the big two fights: villains vs the Bats and Babs and Stephanie vs Dick and Damien.

On the first fight, how well Batman, Batgirl, and Robin can kick ass when working together rang really clearly. With Dick, we get a Batman who can be vulnerable. He’s still Bruce’s protegee; but I can’t imagine Bruce, of modern times, leaning on Batgirl for support after a few broken ribs. While Stephanie certainly has problems with going in over her head like Babs did, Robin’s portrayed as the one who goes in with all guns blazing. It’s interesting how Miller constantly reminds us of Damien’s age.

I like that the battle led to Dick and Babs making the sharing of the Batcave work. (Of course, with Bruce’s pending return, this alliance isn’t going to last long.) I’m glad to see Babs here making a conscious effort to move on from Dick. While I think Babs grew as an adult in Birds of Prey, she never really left her first love behind.

Stephanie and Damien as the children hanging out high in the Batcave and waiting to hear from their “parents” worked a lot better here than in previous issues.

This read like the weakest issue of this series to me. I know a lot of other people really loved it because of their investment in Stephanie and Tim’s relationship or undying love for Tim. Tim’s never been a character I’ve gravitated toward, and I haven’t read all the backstories on these two. Though at the same time, I didn’t feel Miller left readers like myself in the dark about their relationship, the emotions just didn’t come through it the same way.

Part of it for me was Caldwell as guest artist. I can’t put my finger on it, but I just straight up don’t like how he draws Stephanie. How badly her hair coming out of her cowl looked bothered me in all the scenes of her in costume.

I liked Stephanie’s ingenious way of getting a message back to Babs. Because Babs without power usually freaks out. Plus, a nice call in to Supergirl to take down Ra’s al Ghul’s network.

However, this story did not leave me compelled enough to pick up the Red Robin title to finish the story.

Batgirl seems to be back on her feet. Granted with a few snafoozs with Babs’ new secret lair and computer set-up. I thought Babs wasn’t going to put her Oracle tech near her home again? Also why was it raining in the basement? I get leaks, but when I lived in a basement that flooded, it came in through the walls.

Once again, I really enjoy how Miller makes Batgirl — Stephanie’s Batgirl — the hero of civilians. Again, Stephanie has a cute scene with a young girl who’s part of the population she’s saving.

And the Calculator’s back. Not surprising, especially with Babs rehabilitating Wendy. The set up of Stephanie having a wonderful and perfect time is always right there for the fall. She looses her grip and her victim/villain she’s attempting to rescue.

This is probably one of my favorite current comics, and as much as I’m looking forward to Simone’s Birds of Prey relaunch, I’m worried what’ll happen to this title.