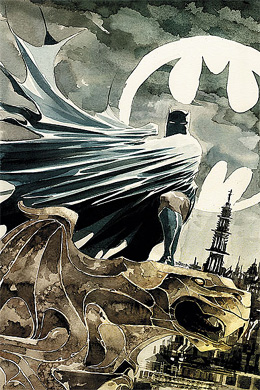 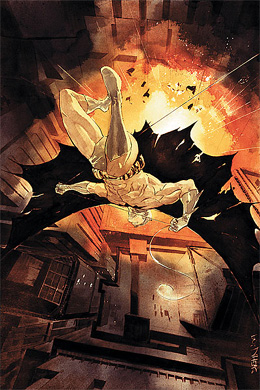 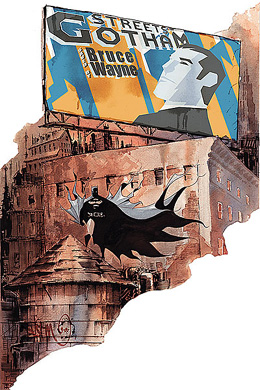 Mostly a set-up. Mostly a what are the new Batman and Robin going to do and will the criminals realize they aren’t Bruce Wayne and Tim Drake?

Lots of exposition on how broken Gotham is by several of the characters. I did enjoy the bit about Harley trying to legitimately buy something and people freaking out given her past.

Clearly, Dini is trying to take Batman back to the era where it was Batman and Robin fight their supervillains with the aid of Police Commission Gordon.

This is the real reason why I picked up this comic. I love Manhunter as written by Andreyko.

And while it’s sad to see Kate leave behind Ramsey, she’s perhaps the only smart parent who knows Gotham City is not a safe place for children. And certainly not going to be safe for anyone attached to Kate now that she’s the interim D.A. I’m glad that Andreyko has shown Kate’s ex-husband to be a good father and that her son will still be raised well when she’s not able to be with him.

I loved the talk between Kate and Barbara. Definitely for the win with Barbara’s new harder side.

It’s also great to see that villains just as afraid of Manhunter as they are of Batman.

This comic is still a little too plucky for me. It tries to be serious and then more like the cartoons in attitude.

Clearly, Dick and Damien are in over their heads. And clearly, Hush has them pretty much on the hook.

I’m missing full-length issues with this title. As a writer, Andreyko does wonders in building up his story and instilling clues as needed. But in these shorter-length second features, which I’m paying $4 for, there just can’t be as much build-up.

I’m excited to see her team-up again with Huntress. It’ll also be neat to see what they do with Arkham Asylum because the balance between state-of-the-art makeover and the Gothic horror needs of Batman will be interesting.

And, of course, Jane Doe is waiting in Kate’s car.

Does stating the Joker’s origins make Moore’s Joker canon? Because really, the scariest part of the Joker is that he has no background and is no one.

I’m not really sure a group of superheros can keep Hush in line. Mostly I wonder what this says about his kidnapping of Harley in Gotham City Sirens. Are editors not talking to one another at DC?

This is really a great fight scene. Kate running in her skirt, using all her instincts to fight off Jane Doe. One thing I love about Manhunter is that nothing is “below” her in a fight, especially when her life is in real danger. She’s going to use nature and some pop culture trivia.

And of course, Oracle put a GPS on her car. Oracle, the new OnStar.

And good to see that Huntress hands Manhunter her power stick in order to stop Jane Doe herself. Excellent agency. I love this comic.