First, Happy Birthday to Me!! 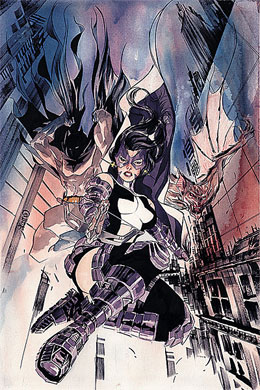 Usually, I enjoy a story, even a one-shot, told by someone else to see an outsider’s perspective on the situation. However, here the technique fell flat. The story of Sherman Fine as a real estate broker for Gotham’s criminally insane super villains is an interesting concept. They definitely have to get their evil lairs somehow.

However, Fine’s story really seemed to be setting up Victor Zsasz as scarier than the Joker. Okay, maybe Dini’s pushing a dark plot with the kidnapping, killing, etc. of children. However, Zsasz has never reached the level of terror the Joker pushes.

First, I’m so happy Huntress is part of this and that Andreyko’s clearly bringing Dylan to Gotham.

Seeing Kate still juggling her Manhunter duties with being a mother and being the District Attorney of Gotham is awesome. I really like her facing off with Two-Face as one-time beloved DA versus the new DA in a good showdown.

Huntress was right that it was interesting to see Manhunter not kill Jane Doe.

This issue was extremely engaging. The fight was great as was Helena’s inner dialogue and exchanges with Babs. I really like that Yost gives us the background on Man-Bat without feeling like “this is exposition” time. Same with Father Mark’s history.

The art team — Dustin Nguyen (pencils), Derek Fridolfs (inks), and John Kalisz (colors) — really brought the story and Gotham to life. It was gritty, while maintaining a clarity so you could keep up with the action. It felt like Gotham: like what I see when I think about Gotham.

While I certainly can understand why Helena is questioning the entire Batman and his followers keeping villains alive and trying to rehabilitate them code, I think a lot of Helena’s urge to kill has already been covered both in her miniseries and in Birds of Prey. Perhaps this will later tie back into the arrival of Manhunter. That said, I do like the inner conflict of Helena trying to figure out why she’s keeping Man-Bat alive when unlike the rest, she doesn’t know him as a person.

Also, anyone who can write Man-Bat seriously deserves some kudos.

Yay, it’s Damon. (You know, I’m going to get excited every time Andreyko brings in a character from the Manhunter series that I was afraid had gotten lost in the shuffle from L.A. to Gotham City.) I really do love his and Kate’s friendship, in addition to their professional relationship. I’ve always enjoyed the realism of Kate having Ramsey that Andreyko’s brought into the comic without having Ramsey be a dead weight to the story.

Wait, I thought Harvey Bullock was fired due to corruption? Did someone forget history? Or was he rehired? And why?

Of course, Dylan’s over his head again. When is he not? If it’s not his professional life, it’s his personal life. I really can’t wait to see Kate’s intervention with him. Because you know it’s going to happen.

This was a really excellent story. The ending was really great and had some surprise elements to it. The script was incredibly tight and focused, and the art matched perfectly.

I really enjoyed how Helena came full circle in her opinions of Man-Bat. He did help her, and she realized he was trying to help her all along before he explicitly said so.

Of course, Batman showed up at the last minute to be the one to save the day. He does that. But it was nice to see Father Mark being the one to knock out the bad guy.

Oh, Dylan. What else can you really say? After they escape from the police, Dylan’s going to get more than just a zap to the leg with Manhunter’s power stick.

Dick flirting with Kate was cute as was her losing her security detail. Though she should probably give up trying to lose them in her personal/public life. She can’t always whip out her power stick while grocery shopping.