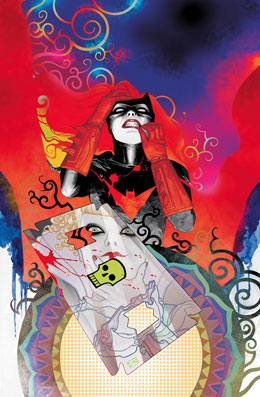 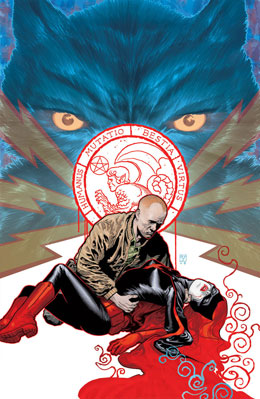 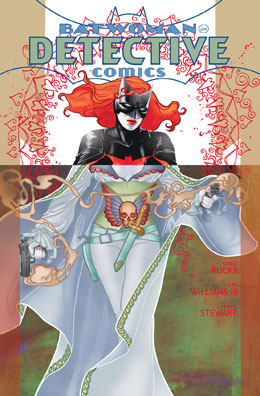 I love this comic so much. Everything from the art to the layers in the story.

Batwoman’s fight with Alice is paced so well, and in a way, that escalates the tension, puts the hero in danger, and builds upon the characters of Kate, Alice, and the Colonel. Kate’s anger is both her motivation and her Achilles heel. She probably shouldn’t be going after the Crime Cult without the aid of other heroes. And her father only kind of counts, but it’s nice to see him showing more affection for Kate than just buying her military-grade equipment and training her.

I love how Alice stands out so much against the background of Gotham and the red of Kate. Also the difference in look when Alice pulls Kate’s wig off.

I do think Rucka’s writing arcs are shown a little too much in this issue as both his heroines, Kate and Renee, end up down for the count and seemingly beat at the end of their respective stories.

The best part of this issue is Kate’s stepmother comparing Kate and the Colonel. Great on Rucka for showing us how similar they are through other characters and by their own actions. Obviously, so much so that’s the Colonel gets himself kidnapped by Alice.

I’m not quite sure what I think about the introduction of Maggie Sawyer as a possible love interest for Kate. In a way, one could argue that Kate’s type is the policewoman type. However, one could also say that Kate’s already done this story with Renee. But at the same time, it’s not a story in print, only her and Renee’s aftermath in 52 is something we can read.

As always, this is nothing if not a gorgeous book. I can stare at these layouts for hours. I wish I could show this art to anyone who thinks comics are just for kids or still drawn like 90s Liefeld “drawings.” In this issue, Williams’ layout reflect the story’s big reveal: that Alice is Kate’s lost sister Beth. They’re from the same mold and drawn as such. I also discovered that I really want to cosplay as Alice after reading this issue.

I love Colonel Kane’s reaction to Alice. How his only warning to keep Kate focused is to tell her to use the Batman Rule. I love that Batman now has his own rule. Of course, since it’s the Fifth Commandment, I vote we just start calling the Fifth Commandment (Thou Shall Not Kill), the Batman Rule. Not only will small children going through confirmation and religious indoctrination never forget that, but they’ll more importantly never forget Batman and grow to read comics as awesome as this one.

I really can’t wait to read the fallout in the next issue. Good thing it’s in my comic stack.