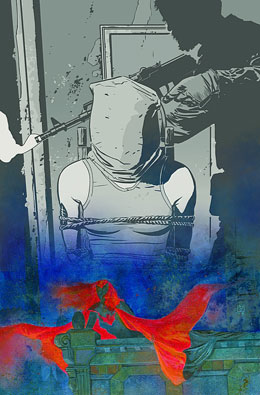 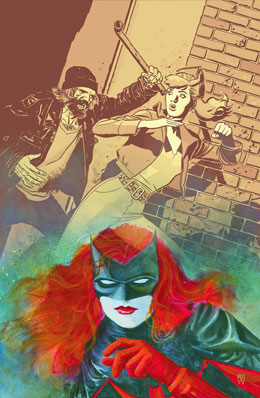 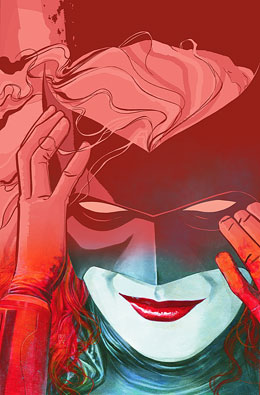 I wasn’t sure this issue would win me over. Mostly because I’m not sure how much I like this level of trauma as motivation in a character’s past. I’m rather a fan of characters who become superheros because that’s who they are. But Rucka manages to pull this off. We see Kate’s connection to Beth and their mother. We see her struggles for her father’s affections. It all works.

I liked that Kate’s mother’s death was political and tied to the Colonel’s work. Better than randomly killing her in that it plays nicely into Kate’s reaction at getting hunted by the Crime Bible Cult. Such horror and sadness. The art on the last page was just heart-wrenching.

In contrast, Renee’s backup story got a happy ending. Renee breaking out the women was very satisfying. The fight scenes were awesome, and I await her next adventure.

I wasn’t sure how I felt about this issue for a while. Don’t Ask, Don’t Tell is quickly becoming one of those cliches for every gay military officer. Gay: underlined and bolded as the motivation for the story. Conflict, of course. Sure. It’s natural for Kate to have gone into the military given her family’s background, and no doubt, the military was a safe place for both Kate and her father after her sister’s and mother’s deaths.

What changed my mind was that I loved Kate sticking to her guns and saying she wasn’t going to lie about her sexuality. She admits to nothing. Just saying she’s not going to lie. An excellent show at how stubborn and uncompromising she is. Look out, Bruce Wayne, you might have a contender in this department. Of course, this makes me really want to see Babs and Kate go head-to-head.

Plus, the backstory of Kate and Renee’s meeting and relationship makes me so incredibly happy. I’m such a shipper. While they did get together, it’s pretty clear neither Kate nor Renee have been together at the right moment for both of them as they’ve fully come to realize themselves. (Kate is, of course, still on this journey.) Kate’s clearly very lost without the military’s structure.

As far as The Question back-up story, I loved seeing Renee team up with Helena. They make a great fighting duo.

Anyway, this issue was as gorgeous as always. But in a very bittersweet way as this is the last issue of Detective Comics for the dynamic duo of Rucka and Williams. Yes, I know Batwoman’s going to be getting her own series. (And Bruce is coming back in April.) However, it was so nice to have a comic led by a woman character that didn’t have her name in the title or wasn’t pigeonholed as a woman’s comic. It’ll be interesting to see what Rucka does with the rest of his time as writer on the title, but that alone doesn’t guarantee I’ll follow it. (This may largely depend on where the Question back-up story lands and her upcoming title.)

The confrontation between Kate and Renee was perfect with Kate info-gathering in seedy bars for her Batman-like take down of the thugs. (How hilarious was it that they thought she was Batman?) And of course, Renee just thought Kate had fell further down the rung of doing nothing with her life.

I loved that Jake knew exactly what Kate was up to. And how instead of busting her ass or turning her in for theft, he decided to support her. Jake was right that Kate had already lost if she was just looking for revenge for her sister and mother. I’m also glad that the issue explained how Kate got her paramilitary training to fight bad guys.

The moment Jake revealed the Batwoman costume version 1.0, I knew there was a fall coming. Father and daughter were just too close. And of course, the set-up has been the entire arch with the reveal of Alice being long-thought-dead Beth. Poor Kate.

I’m loving the backup story team up of Renee and Helena. They are so awesome together. I also adored them finally discovering their shared connection of Charlie/Vic Sage/The Question. Helena’s awkward question about if Renee had slept with him was almost too much.