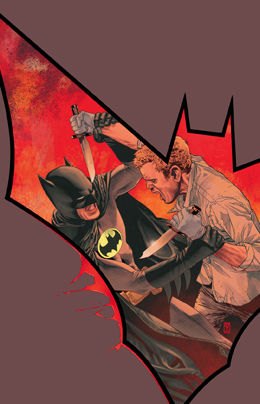 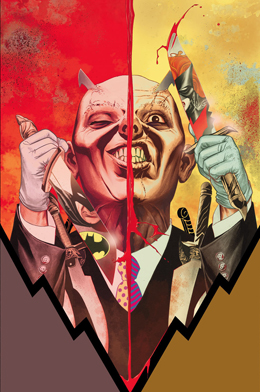 I feel bad for Jock. His art is good. However, J.H. Williams III is an almost impossible act to follow. Jock’s style fits well in with the Gotham landscape. His sketchy edges work beautifully in the grit. The two-page layout contrasting Batman and Batwoman and their styles of detecting. Which are really the same. Now here’s the real battle for the cowl.

I’m rather sad to see the cover without Batwoman on it. Batman has so many other titles. Let Batwoman run this one. She’s the interesting character here. I know all about Gordon’s relationship with Batman. Even as Dick, it’s been established over the years. Kate’s relationship with Maggie is far more interesting. On the superhero-cop dynamic, we have Maggie who’s never trusted the costumes, even Batman, and Batwoman who’s still new and making a name for herself. Is she good? Or is she an ends justifies the means good? On the Maggie-Kate level, there’s the whole unfinished business with the dancing at the ball. Where’s that going?

Bette’s totally going to figure out that Kate’s Batwoman and that’s going to be interesting. Plus, we know how Kate reacts when villains come after her family. All hell’s going to rain down.

Yeah, Tot’s totally pissed at them. First, they trashed his house and they paid off an assassin to leave. Yeah, like that’s ever a good idea.

In the last issues, we’ve seen how well Helena and Renee fight together. They’ve been the dynamic duo. They’ve taken down the bad guys, and they’ve stopped the evil. Well, not all of it, but they’re working on it.

However, here’s the downside of them: they would buy off a murderer to fake their own deaths and get information. They get it where they can. Tot’s right that Charlie/Vic wasn’t like that. Should be interesting to see all the fall out. Because it’s coming. You know it.

Odd feeling after reading this issue, almost like the title’s slowing down or waiting for something. Not quite sure why. Perhaps it was Batwoman being so quiet at the end.

Obviously, Bette’s going to find out about Kate’s secret identity. But it looks like Bette’s got her own secret. (Of course, my DC characters skills do not match my Marvel ones, so I’m not sure if I’m supposed to know who she is. Flamebird — a former Batgirl — as my google-skills tell me.) But I am enjoying the familial friendship between the two.

I think Jock’s art style lends a hand to the sparse feeling of this book. Plus, I suppose if you’re really in a fighting for your life battle, there’s no time or lung capacity for quippy one-liners. As much as I’ve enjoyed those in other books.

In this issue, the backup story really struck out on it’s own. I wanted more of it. I didn’t want it to be short. I’m really loving Helena and Renee busting heads together. They make a great team.

Of course, Tot isn’t too happy about the situation. I loved him telling Renee that she’s a lot more like Charlie than she thinks and that’s why he’s pissed at her.

Renee’s reaction at finding out that Helena’s computer whiz source is Babs was perfect for Renee as the former detective who’d served under Babs’ father. It’s a different kind of celebrity than those who’ve encountered Babs first as Oracle. The interlacing of the three women eating food and Helena and Renee’s Ukraine trip worked extremely well. It put the story right where it needed to be, already in the action. The divide of Helena’s and Renee’s skills also helps reinforce just how well they work together.

Rucka’s writing here was in its groove as all his other great Renee stories.

In this issue, Jock’s art really shined brightly. As did his layout style. I feel like Jock played a lot with this issue and carried the storyline to the finish line.

Speaking of the finish line, do I need to say how sad I am that Rucka’s not on this title anymore? Or is that too much of an established song?

I don’t have much to say on the Cutter story because it’s just not my flavor. I didn’t love it, but I didn’t hate it. Or maybe I just don’t have the gusto for the ending like I had in the beginning.

The torture seemed a little light to me. Almost comical. And I don’t know if that’s just because of Hamner’s art style. A style which I like in general, but I don’t know if it works well with “darker” storylines.

As an old-fashion mystery and detective plot, I really love this back-up story. When it’s done in two issues, I’ll be interested in reading it all in one-swoop. I’m sure I’ll find layers that I haven’t seen on first read. At least, I hope to find more as you should in any detective mystery.