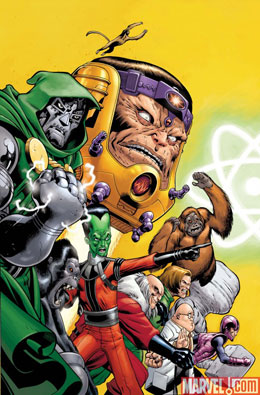 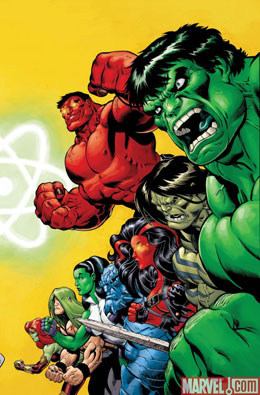 Fall of the Hulks: Alpha by Jeff Parker

This story was incredibly well framed by the narration of the Leader. Parker used his intellect really well to sound logical, reasonable, and as someone who planned ahead. It was still choppy, but was a lot better than I expected.

The pacing was also done well as we moved through time. When the story started, I wasn’t sure how far back in time it was supposed to take place; but as more recent events came up in the timeline, I caught on. It’s also nice to see what the bad guys are doing in their off-times. Stealing the lost library of Alexandria seems like a noteworthy cause.

Of course Doom betrayed them. He is Doom.

Finally someone’s going to explain who the Red Hulk is and why I should care.

Fall of the Hulks: Gamma by Jeph Loeb

Thankfully, finally they revealed that the Red She-Hulk is Betty Ross. Clearly, someone was reading Ultimates. Now where is the real She-Hulk? I don’t believe she’s dead at all, and I think that’s why Lyra is hanging around. Of course, I’m not entirely sure Hulked-out Betty is evil either. Just pissed off. Especially since this one was supposed to be about the heroes.

Both Samson and Banner are douchbags. I really could care less. Same with General Ross. Blah. Blah. Emo white dudes with all the power in the world who have issues or whatever.

Though I am interested in Bucky’s connection to Colonel Glenn Talbot.