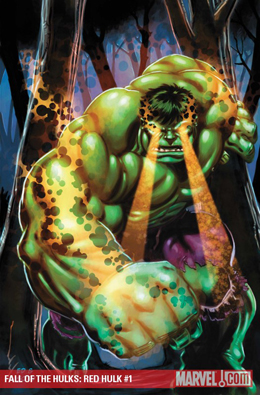 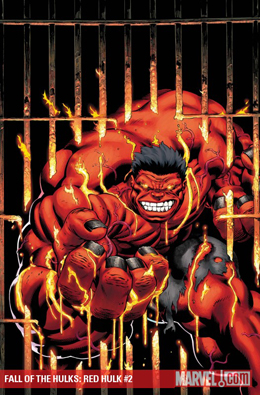 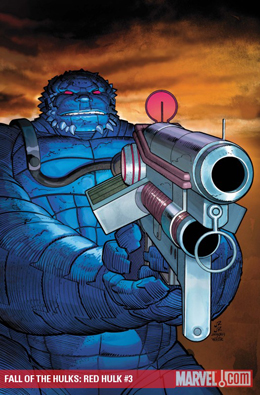 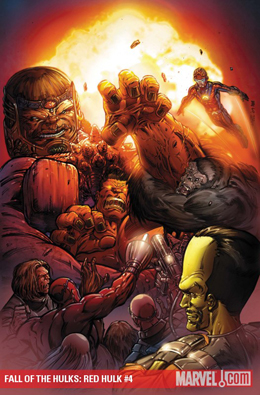 Fall of the Hulks: Red Hulk #1 by Jeff Parker

I’m glad that Parker is like “let’s explain the Cosmic Hulk since we brought him back.” Or more importantly, let’s explain why he’s back as M.O.D.O.K.’s newest toy. It may have mostly been a smash-and-bash issue, but it was needed.

Somehow I’d be really surprised if Rick Jones was actually a ticking time bomb. More likely the Leader was like, “I can’t do anything with this fool of a sidekick. Send him away. Fail.” And then he cheered himself up by looking at I Can Has Cheezburger?

Also glad that someone finally told Bruce who Lyra is and how she’s his daughter. I don’t know, what I was thinking, just perhaps that Bruce “I’m so smart and don’t you forget it” Banner might’ve figured it out sooner. Or would’ve been monitoring all gamma creatures. Or something.

Anyway, yay for the promise of Lyra.

Fall of the Hulks: Red Hulk #2 by Jeff Parker

This story is incredibly interesting considering Parker is possibly the first writer who giving Red Hulk more of a personality. Yes, Pak had him interacting with Bruce Banner and them working together. However, here Parker takes it a step further and has Red Hulk working with Thundra. This is the same Thundra that in other Hulk titles fought Red Hulk and was ready to kill him. Also there Red Hulk was incredibly misogynistic and a barbarian powerhouse.

Making a believable story where Thundra trusts Red Hulk is no easy task. Parker takes his best shot, but I found there was still an element of unbelievability. Thundra’s never been that forgiving.

I do like the Red Hulk pulls out all stops. He mentioned Lyra and how the Wizard’s after her. (But leaves out that Lyra’s joined the Frightful Four.) He also knows the Leader’s coming after Thundra herself.

The inner narration of Red Hulk also threw me a little bit. He seemed so logical and a lot smarter than before. I mean, I’m very happy that after how many years, they’re finally giving him some sort of actual personality, but again, not what I expected based on previous canon. I just have a hard time reconciling the two. I do think Red Hulk helping Thundra go back to her time-line did give him some actual redemption points.

Fall of the Hulks: Red Hulk #3 by Jeff Parker

Oh, no, this week Rick Jones turns bad. That’s right, for once in his life, Rick starts attacking his friends. But don’t worry, it’s only brainwashing. He actually still loves Bruce Banner and is still the Marty Sue of the Marvel universe.

Apparently, the center of this story was Rick’s pain about causing Banner to be the Hulk. (Which should’ve tripled since A-Bomb is incredibly harmless.)

I smell editorial mandate with this story. Yawn.

Fall of the Hulks: Red Hulk #4 by Jeff Parker

I really think four issue just dragged this miniseries out too far. I didn’t really need to see the scenarios where the Leader wins. I love how all the villains make themselves handsome after they take over the world. If they’re so obsessed with their looks, why don’t they use their resources and money to make themselves pretty? Why isn’t there a magazine about how they just want to be love and beautiful? (Oh, wait, that’s only women characters.)

I feel like I still really don’t know anything more about the Red Hulk.