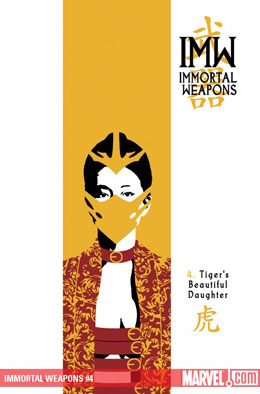 This story gets major points for actually being about an Immortal City. However, while it does explain how Li Hua became her city’s leader and leading warrior, it doesn’t explain how her mother did. I feel like an editor needed to sit down with these writers and say, you need to a) talk about the Immortal City, b) talk about how an Immortal Weapon is chosen, and c) talk about how this warrior was chosen. This tale and Fat Cobra’s achieved these objectives better than the others. So far.

I love the gender role reversal, and how the men “go off to battle” as a front to keep the women safe. I like the way this story plays with the notions that women’s ability to give birth makes them too sacred to go to battle, but that these women need to be warriors in order for their society to survive. Li Hua’s connection with her mother beyond the grave was wonderful.

The explanations of the masks were well-done. I can’t help but wonder if Swierczynski snagged it from a feminist pro-veil response.

Despite all this, I think the issue makes a lot of short-cuts with background characters. They’re thin and based on simple stereotypes.

This story was very much one about John Aman. He made speeches, to Danny who guest-starred, fought the bad guys, and maintained his aloofness and mysterious nature. Danny served an excellent function in this story. Had the Prince of Orphans sidekick been someone who wasn’t close to his equal, it might’ve tipped this story off-balance. Of course, who do you call to fight a dragon other than someone who’s already defeated a dragon.

The entire dragon plotline made me realize just how much I’d love Jeff Parker to write a run of Iron Fist and tie-in the dragon storytelling he’s been doing in Agents of Atlas.

One thing I didn’t get from this comic was additional character-building for John. Okay, he had his one-shot already and this is the second story about him, but I still expect something. I wanted to know something about who he was besides a fighter of ghosts and addicted to meditating.