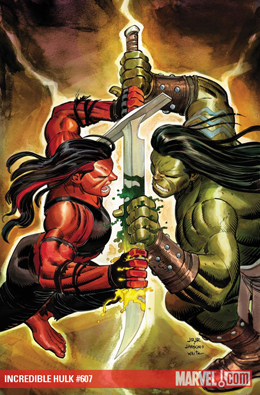 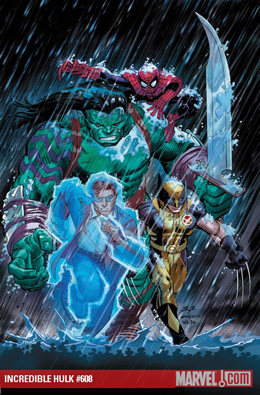 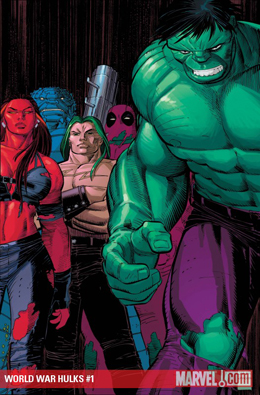 If I already didn’t like Banner, I surely wouldn’t like him now after reading this comic. He does routinely put everyone in danger, while acting like the smartest jackass on the planet. I’m glad the Avengers questioned him when he said he wanted to rescue Reed Richards. The same Reed Richards who shot him into space. Yeah, it’s really Betty that he wants to rescue. And he’s going to manipulate the emotions of those who’ve lost very important people in their lives to help him. Of course, most of them had loyalties to the Hulk, not Banner.

So glad someone noticed that Banner will become the Hulk, sooner or later. Skaar was surprisingly quiet this issue. Maybe Pak’s saying that he finally learned how to behave in polite society.

The art here is really T&A. I like Stegman’s crisp line work better than Pelletier’s pencils in the main story; however, everything’s a little too “pose for the camera.” I guess I just need more face than bod.

I called it that She-Hulk wasn’t dead. Just another LMD.

I’m really glad they’re finally writing Samson as an out-and-out manipulating asshole. Because he’s always been one. The comics have just been more forgiving.

I really dislike Pelletier as the penciler on this book. I don’t like how he draws faces, but more so, I don’t like how he draws technology. Everything looks so blocky. And every time, he pencils a bulked-up woman, she looks like a really bad body building drag queen with balloon boobs. Or this is how I see his Red She-Hulk anyway. I think it’s the thick pencils combined with the black inking. Too many lines. Except in the way too fresh faces of Amadeus, Lyra, and Betty.

So the Hulk books are considered completely out of continuity, yes? Besides in the general, Wolverine stars in 12 books at once continuity tear. There just seem to be too many “big” players here who are really elsewhere in their own books.

The only thing I kind of liked about this book was the Leader’s glee in winning against Bruce. Or did he?

This whole turns everyone into Hulks including Namor, Wolverine, Spider-Man, and War Machine is ridiculous. Don’t even get me started on Hulkpool. No matter how many times Jeff Parker tweets about it, I’m not on board.

First of all, thank you, Ryan Stegman, for tweeting back to me when I didn’t know who wrote the story because there were no credits last month. I’m glad to see you guys were properly credited this month.

Unfortunately, I can’t say I liked the story any better. Unless this entire story is one big joke and lesson on why bodysuits that zip up the front — which you apparently zip down to show off your bosom — are very impracticable. In fact, Red She-Hulk strips Domino in about 10 seconds flat. Impressive.

I do appreciate that while Domino is completely naked and Elektra is saving her from Red She-Hulk is the time Stegman draws the least cheesecake art. But then there goes Red She-Hulk getting stabbed by Elektra in an appeasing enough fashion to call for an O-face.

I was rather surprised how well this issue turned out. Wasn’t ground-breaking, but everyone pulled in a good story here. I didn’t have very many expectations, and this was a pleasant surprise.

Wait, did I just like a story with Rick Jones in it? Oh, Parker, you can make me like almost anyone.

Rick and Marlo were such a cute couple here. I would totally read a miniseries about her penned by Parker. I also really enjoyed Howard’s pencils. His drawing of Marlo as the Harpy won me over, especially considering how awfully she was drawn in another book.

However, I completely disagree with the principle of Rick not being able to see Marlo as A-Bomb. Seems silly to me. It’s not like he turns evil. Also not like Marlo doesn’t understand about danger or what Rick’s doing. Or that she wasn’t kidnapped and experimented on by the Leader already. Rick just has too much of a guilt streak.

“Nobody Dies Forever” by Harrison Wilcox

Nice to have this bit about Bucky and his time with Talbot. However, I’m really not a fan of artist. Okay, I like how he draws Bucky. But his Ms. Marvel is unimpressive; for all I can tell, she’s hiding half her face due to a nasty breakout.

I do have a soft-spot for Winter Solider tales.

Out of all the stories here, this was probably my least favorite. Amancio’s art was very ’80s. Maybe it just seemed like a shocking contrast compared to the photo-realism in the last story.

As for the story, figures that the Cosmic Hulk started out as the military’s idea. The worst ideas always are.

However, I really don’t understand Talbot and Betsy hooking up. It makes zero sense.

“Object of Desire” by Harrison Wilcox

I’m really curious where they’re going with this plot. Not just because Jen’s my favorite character. I’m completely waiting for an all-She-Hulks team up where they destroy the Leader and company and free all the heroes. That would definitely redeem this whole event. (Especially when certain Marvel editors kept assuring me there was an awesome She-Hulk storyline coming up, and World War Hulks was it.)

But what’s up with the weird sexual thing Red She-Hulk’s having with Samson? Barf.

The Deadpool story was the one I was least looking forward to. Frankly, Deadpool’s in too many books these days; I remember the good old days when Deadpool got canceled for low numbers. But give the guy one mid-size part in the mediocre Wolverine movie played by a shirtless Ryan Reynolds… Wait, aren’t straight guys the big comic buyers and target audience?

Good thing Parker’s a humor writer. A brilliant one at that. I haven’t actually laughed at a Deadpool comic in a while.

Of course, the dread grew larger when Hulkpool — the world’s worst idea ever, I don’t care how much you tweeted about loving writing this, Parker — came into being. Hulkpool who wants to kill Deadpool. Yeah…

But then Bob, Agent of Hydra showed up and somehow everything got better. If only Weasel came back…