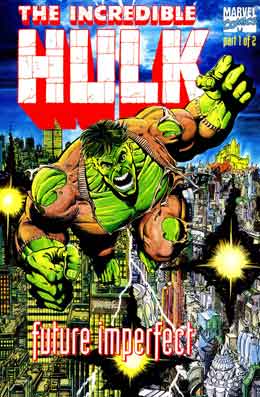 David’s story takes place in the post-apocalyptic city of Distopia. At the start, a group of people are running through the crowds talking about some sort of plans. These must be the good guys! How do you know? Well, for starters, one of the women gets shot in the head by super-future-robot cops by the fifth page!

And a chase ensues! Our heroes are cornered in an alley where a house they were randomly running by falls down. The heroes make their escape, but a figure rises from the rubble of the collapsed building.

Well, to be fair, the last one’s probably because the Hulk beat up and/or killed most of the other cops. But of course, even a super-future-robot police dog is no match for the Hulk. Eventually, there’s only one policeman left to permanently cripple, but this one gets a message, although I’m not sure how Hulk expects him to deliver it now.

Cut to a palace. A political minister pushes his way through party full of scantily clad women to give the Maestro some important news. And who is this Maestro, you ask? Apparently, he’s someone who asked “not to be disturbed by affairs of state today” so he could screw a roomful of women into a coma.

And he also happens to look a lot like the Hulk. Except more in a ‘dirty, crazy, old man who might try to talk to you about conspiracy theories while you’re waiting for the bus’ kind of way.

Okay, so I was never completely sure what that last one meant. They all use it like it’s slang for some common word, but they only use it when they’re talking about the big, green hunk of man meat.

Apparently the Hulk’s been around for some time, and he knows more about what’s going on than the reader, but he still wants proof. So Janis leads him to the next room.

It’s a creepy collection of hero memorabilia! There are plenty of disturbing artifacts, like the “Dead Again!” Jean Grey/Phoenix poster (I’m not completely sure why that bothers me so much) on the wall and the cleaned, polished skeleton of Wolverine. But to me, the creepiest by far is dead center in the far background. IT’S THE PELT OF BEAST! That’s right, apparently in Peter David’s future, the Beast was skinned and turned into a rug!

And who would be obsessed enough with superheroes to amass such a morbid collection of artifacts?

It’s Rick Jones! That’s right, Rick “I hang out with superheroes and am completely useless, but remember that one time I saved the universe?” Jones. Bitchin’ indeed.

Back at the Maestro’s palace, Pizfiz, one of the heroes who got captured at the beginning of this issue, is being tortured for information on the resistance. And Maestro brings along one of his sex slaves to enjoy the show. A mind probe lets the reader see the events that led to the Hulk being brought to this time. Apparently the rebels found Dr. Doom’s time machine and decided to go back in time to get someone who could save them from Maestro’s oppressive rule. So Janis is sent to meet ‘90s Rick Jones, who doesn’t understand why some girl with a ridiculous haircut is so eager to speak with him. What ensues is possibly the creepiest fight scene ever.

To convince Rick Jones she’s not just some random crazy girl with bad hair, Janis shows him his Avengers ID that has a special note from his future-self written on the back. And what was the message that Rick Jones wrote for himself to read after fighting a girl from the future with his junk swinging freely? “Shake hands with your great granddaughter, stud.” Not kidding.

Oh, and then Pizfiz effectively dies from the brain scan and Maestro crushes his face for spitting during the interrogation. The expression on Maestro’s girl-toy’s face when she gets “spluch”ed with blood is priceless.

Elsewhere, Rick Jones explains the fate of the world to the Hulk. Some of this I really liked. The Hulk has been transported 90 years into the future. The world has been ravaged in several great wars.

I like the concept that even with all of the superheroes going around and fighting off the latest galactic threats, that humanity still destroys itself in the end. Even more so, I like how David explained it. A full page of well-written exposition and interestingly designed plot. And then Hulk asks about Betty Ross…

Rick points him to the corner.

My suspicions are confirmed. Not only has Rick Jones been collecting superhero memorabilia, but he’s also become a rather prolific grave-robber. For the past ninety years (which makes him what, 120?) he’s been digging up dead superheroes and cremating them to amass a collection of superhero ashes to sell on eBay. And with certain interesting bodies he’s taken other mementos, like Wolverine’s skeleton and Beast’s fur coat (damn you, Peter David). Yes, it is confirmed that Rick Jones is a sick, sad little man whose encounters with superheroes have led to a life-long obsession that made him the world’s most sick and twisted fan-boy.

Back to the exposition, Rick “grave-robber” Jones explains that since the Armageddon that killed all of the other superheroes was nuclear, the Hulk not only survived but also had his power enhanced. It might also have made him a wee bit crazy. And while the remaining members of the human race hid underground, Hulk built a dilapidated city for them all to live in! He even built radiation shielding to protect the humans. Why? Well so he could tyrannically rule over them and turn their women into sex slaves! And did I mention that future slang for sex slaves is “Chumlies?”

Anyway, the Maestro now knows where the rebels hide, and he wastes no time attempting to hunt them down. After digging through the streets to get their underground hideout, he sends his men through the tunnels. Various traps — sprinklers filled with acid, poisonous gases, and a room full of lasers — take out most of the men. Of course these obstacles are nothing to the Maestro, but are deadly to his couture wardrobe and his stylish hairdo.

Eventually, the protagonist and antagonist of our tale finally meet.

And with that, the stage is set for the second and final issue of the series.

Overall, issue #1 has a decent premise, but the execution is pretty disappointing. So far I can’t say that this issue would “rank among the classics in Marvel history.” But I’ll save my overall review until I get through the entire series.