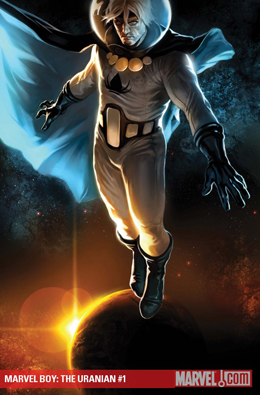 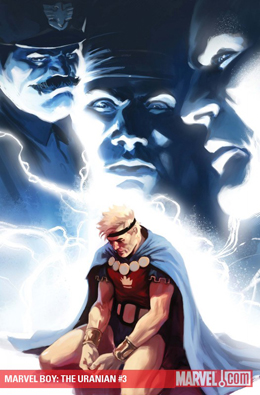 This book was a let down in many ways. Mostly because of how stellar I’ve found the rest of Parker’s Agents of Atlas writing. Marvel Boy: The Uranian wasn’t bad; it was good, just okay.

The story started off way too slowly. Yes, action-packed slowness as in graphic novels there needs to be a connection with the characters before you care. Felix Ruiz’s art looked awful. I’m just not a fan of his sketchy, geometric style.

The second half of the story was much better than the first. I love when comics turn themselves on their heads with meta and the fourth wall. And I can’t say I was expecting it in Bob’s story; he always seemed the least meta of all the Agents of Atlas characters. But Bob definitely needed some advice from Timely Comics’ writers to meld himself into a hero. In a way, he reminds me a lot of Ozymandis, who got his ideas from TV, only Bob gets his from comics. Though he’s not destroying civilization.

Still not a fan of the art. It was a little better this issue than last. I think daytime scenes with more color make it more palatable.

Storywise, the second issue was much better than the first. I like that the Uranians (Eternals) aren’t the nice people they pretend to be and that they have ulterior motives for sending Bob to Earth. Not to mention, they killed his father outright just to get him back under their thumbs. Dicks.

Of course, this makes for a much more interesting plotline than the typical ’50s Cold War plot. Bob stops missiles and Commies, blah, blah, because he’s a superhero is not a stellar plotline for modern audiences. However, corrupt Uranians trying to take over Earth and attempting to make Bob their linchpin is. I’m betting this attack is going to be their undoing. Since they do die out or are killed.

After finishing this mini-series, I’m not sure if I like Parker writing in this era. I think he sticks too much to the Golden Age formula and style. He’s too much of a purist, which leaves his stories drier than they should be.

I do like Bob’s romantic storyline with Vi. It too seems quintessential to the Golden Age, but something Parker could and did expand on. I don’t know how many heroes took their girlfriends to dinner across to the world — abuse of superpowers and alien technology, perhaps — but sweet none the less.

This mini does go a long way to humanize Bob. In the current timeline, he’s been changed so much that he is really an alien. Even his attractions have been altered. But here, Bob just wants to save people. He wants to date. He wants to work with the government, not against them. He wants to live his life and discover his human side. Compared to the current Bob, who for all purposes just seemed to want to run away from humanity.

Bob’s memories of his childhood were very touching. Oddly enough, so was his first time meeting Jimmy and his acceptance of a place on the secret team.