Reviews for Ms. Marvel #39 by Brian Reed, The Mighty Avengers #25 by Dan Slott, and War of Kings #4 by Dan Abnett and Andy Lanning 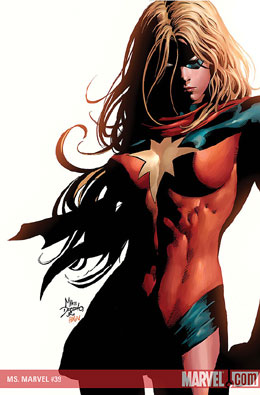 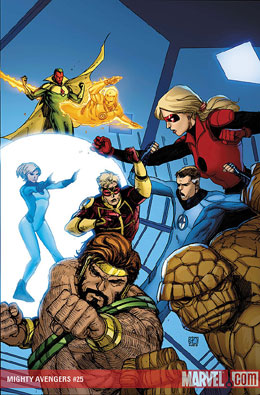 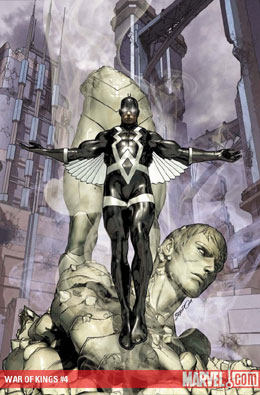 First, I call the energy being being Carol, especially since she exploded from all that excessive energy.

I’m enjoying Karla arguing with Norman Osborne. (And killing the psychologist in the last issue.) I like that this small title shows that they’re not all under Norman’s control.

Karla with her “babies” is both hilarious and sad.

The Mighty Avengers #25 by Dan Slott

This is perhaps the title I’m the most bored with in my pull list. I just can’t care about Hank Pym’s manpain and him and Reed trying to measure to see who’s bigger. Also Quicksilver being all in love with his dead sister… *yawn*

I do like the introduction of another woman with Ban-Luck. She and U.S. Agent should ditch Quicksilver and go have wacky adventures in Asia. (Wow, wouldn’t that be unlike any current Marvel comics. If they stayed out of Japan and didn’t get samurai training.)

I do think part of the problem with Slott’s titles is that Quesada is not interested in “funny books” and under his direction, Marvel has become full of very serious books. Slott just isn’t a very serious writer. Not that he can’t touch serious issues, but he’ll always fall back to wacky comedy. I feel like his writing in Mighty Avengers is hindered because it’s a big title, with lots of expectations, expectations to be a serious book.

War of Kings #4 by Dan Abnett and Andy Lanning

I was really disappointed with this comic considering how I’d enjoyed the ones leading up to it. There was a big missed opportunity in the conversation between Ronan the Accuser and Crystal in further blossoming the relationship they were forced into. The last two issues have shown this so much better. But in #4, their dialog is stilted and too formal. You’d think this was the firs time they’d talked, not the words between a couple composed of a injured husband and a wife who’s been at his bedside constantly and reaching out to healing his people.

But that wasn’t the biggest disappointment…

For the issue where Lilandra dies, it felt extremely anti-climatic. (Of course, I’m not entirely sure she’s dead; this being comics and all.) But really, it seems like the art with Gladiator wrapped around Lilandra’s body speaks all the words that the story doesn’t convey. Thank god for art.