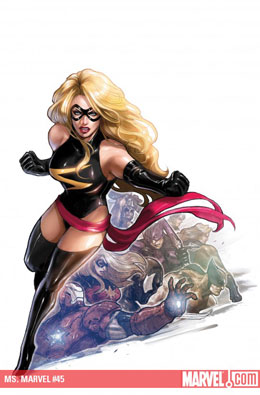 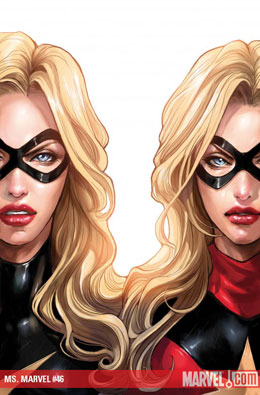 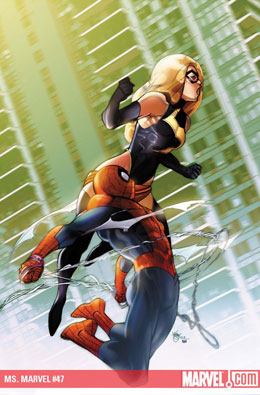 I want to like this storyline a lot. I want Carol Danvers to have everything she wishes for. Just like the Storytellers. However, the plot threads are very convoluted. And then Norman Osborn goes and blows Catherine Donovan’s head off.

Perhaps this would be a better read all collected in a trade instead of issue by issue.

I really liked this issue as it shows the way Ms. Marvel is a hero and can help out the worst of society. In this case, Moonstone. I think Reed hits on a key Ms. Marvel trait: that she uses both her brawn and her brains.

Of course, Carol would never kill Karla. Norman was right; she’s not like that. Carol is a good person and a solider. She’s also trying to live a better life where she becomes Captain Marvel and takes care of those around her in a way she really wasn’t ready emotionally to do before. Dark Reign put her valor to the test.

I like this redemption path for Karla. I can only hope that the main Marvel-verse writers use it after Karla’s exit from this book.

This is really one of the most stellar single issue comics I’ve read by Reed.

Somehow I don’t think I’m ever going to take Peter Parker out on a date with anyone except Gwen Stacy, MJ, or Felicia very seriously. Mostly due to the level of Marty Stu Spider-Man can go to.

I’m sure this comic got slammed for being a date comic. I didn’t mind it as a date comic; in fact, I like the occasional issue to focus on the character’s personal life. This issue just felt as awkward as Carol and Peter’s date. And I’m just not one for awkward date stories. I’ve got enough of my own.

While it was nice to see them just hanging out as themselves at the end, eating chili dogs, it just felt off. Not to mention Carol’s ominous, my arch-enemy is Mystique, talk.