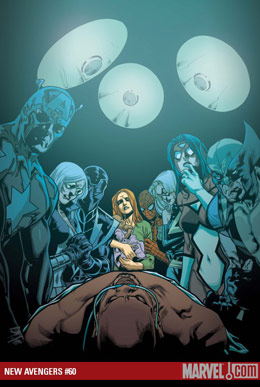 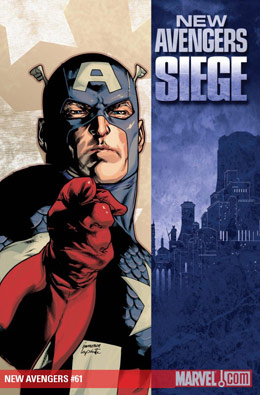 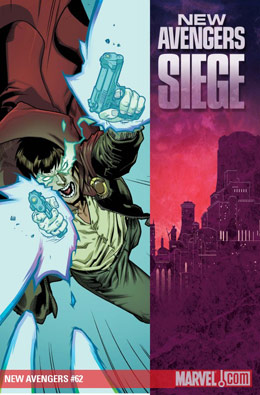 In this little comic-plot detour before the next giant crossover, this book becomes the Luke Cage Show. Now normally, I’d be okay with that. Luke is a character I like a lot. However, a plot about him having a heart attack and a bug/bomb being planted on his heart is just mah. It doesn’t develop his character or move into another storyline. (Even though it did give Jessica a chance to shine in the Annual. Of course, it seems that the Annual was supposed to take place after this issue, y/n?)

I’m so glad Daredevil noticed the bug’s noise. Especially since Bendis was a major Daredevil writer for so long.

There were a far too many five-year-old jokes about bodily functions and tiny men for my tastes. Also, is Bendis ripping the Luke vs his mother-in-law dialog straight from his own life?

I’m still not sure what the point of Doctor Strange no long being Sorcerer Supreme is since he still has his powers, except perhaps the Sorcerer Supreme title needed some affirmative action. As do most mainstream comics.

It was pretty funny to see Norman’s house blow up.

But most importantly, this issue showcases a homophobic joke, and as per my rating “rules,” uncalled for ‘isms in a comic get a rating of one-star automatically. Even if the rest was the best issue ever written, which this wasn’t. Text:

Spider-Man to Luke: Weird. You have two men inside you.
Luke to Spider-Man: Don’t say that again.

Now Luke Cage may not gay himself or waving the pride flag as an allie, but I don’t buy him as homophobic or having such a caustic reaction to someone implying he might be gay. Seriously, he ran around for years fighting crime in a silver tiara with a male teammate who wore yellow booties. You can’t tell me this is the first time anyone’s implied or called Luke gay.

For naysayers out there, what makes a homophobic joke or sarcastic statement is that the punchline is “because he’s gay.” And being gay isn’t inherently funny, just like having the punchline be “because he’s Jewish/black/Latino/blind/female, etc.” Fail.

Is Bendis out to get me? Seriously, the ending was the scariest plotline I’ve read since the Killing Joke. (I am not a horror fan in general so I don’t read a lot of horror books or watch horror movies. I get too easily scared.) I am absolutely horrified by monkeys. Yes, I love all animals, except monkeys, who creep me out. Maybe they wouldn’t do so if people didn’t try to personify them as humans by dressing them up or making them act human. Plus, male monkeys will totally try to mate with human woman and well, a tiny monkey humping your leg might be hilarious or slightly horrifying, but think about a gorilla. And here we have a super villain, who is a monkey with the powers to make women do whatever he wants. This is pretty much straight out of a nightmare prescribed to horrify me.

Overall, I thought the plot was going too many different directions at once. I’m sure team books are challenge to write, especially as Bendis ties up loose ends for the New Avengers with the relaunch of all the books coming up. However, it felt fragmented. And really, there were only two main plots: Steve and Bucky and Jessica and Peter. Which makes it seem like the script should’ve been a lot tighter.

Peter really seems to be making it with the superhero women now that MJ’s out of the picture. Of course, that majorly plays into the stereotype of Peter being the Marty Stu of the comic verse. Come on Spider-Man syphilis.

Anyway, poor Steve having all his mementos trashed. I mean, it was bad enough the New Avengers needed a maid, but then they had to blow up the place.

There were just too many villains with mind-control in this issue. Mind-control: the deus ex machina of super villain powers.

I’m glad to see Mandrill get bested this issue. As mentioned above, I hate monkeys. I so cheered on Spider-Woman to kill him.

Luke Cage seemingly coming back to save Bucky and Steve was awesome. Even more awesome that he found the pink binkie in all the rubble. Hopefully, Steve found some of what he was looking for. It was awesome to see Cage in action against the Living Laser.

I loved how excited everyone was to see Steve, except Fury. Fury is just a dick. Luke, who really doesn’t know Steve that well, bear hugs him. But my all-time favorite reunion moment is between Steve and Carol. Yeah, shipper as charged. They are just so cute together. I love it, especially since she was on the other side when he died.

I also enjoyed Steve telling them to stop snarking so he could hear the news report about Thor.