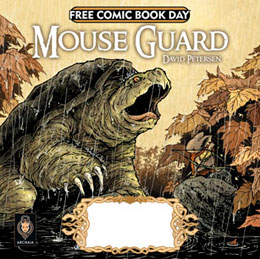 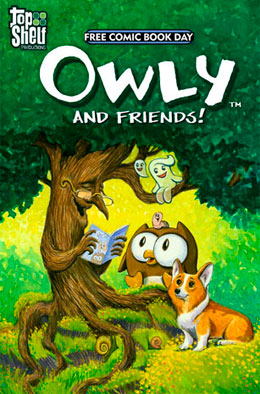 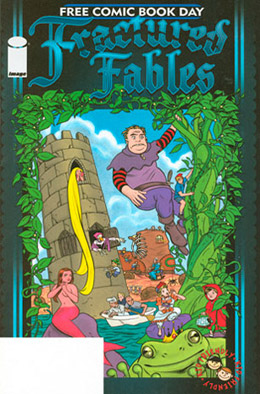 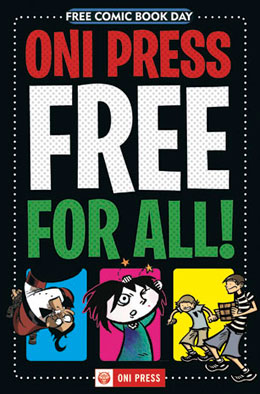 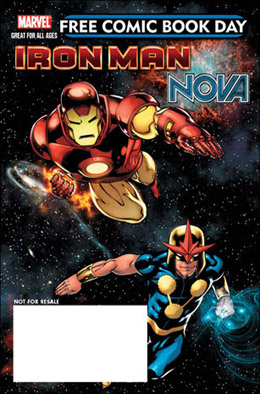 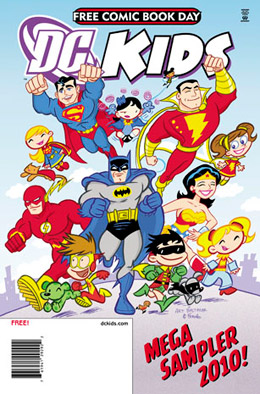 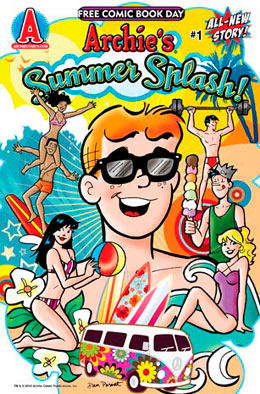 Both stories are super cute, and as someone who watched Fraggle Rock as a child in the ’80s, I thought it perfectly hit the Fraggle-love. If the same creative teams are on the newly-released Fraggle title, I’ll be picking it up. (At least in trade.) It almost makes me wish I had nieces and nephews to share it with. (Dear brothers, you are still way too young for kids. Love, your sister.)

In the first story, Boober goes to become a Doozer after he’s told he’s too boring to be a Fraggle. He knocks over their construction and almost tramples on them. By the end, Boober actually eats the construction. Eventually, he realizes that as a Fraggle, he needs to do what he loves, even if that’s cleaning and doing laundry. I think it sends a good message to kids about being themselves and doing their interests/what their good at no matter what their peers say.

In the second story, the Oldest Fraggle’s having a birthday party and all the Fraggles make art for him, in a contest. Red struggles with her art. She’s so embarrassed when she sees the others’ work and goes to trash it. Getting advice from the trash heap about how art is in the eye of the beholder is perfect. Like the first story, there’s a good lesson in it.

I love and adore Mouse Guard, and this comic was the one I was most looking forward to reading from Free Comic Book Day 2010. Peterson didn’t disappoint.

Gwendolyn is one of my favorite characters. In many ways, she’s the most complex given her status in the community. She’s in a charge, and she has such a quiet power.

I thought the entire thing was cleverly laid out to show the mice’s relationship with the other animals in their world and the elements of nature. Especially since this might be someone’s first exposure to the world. Seeing them making a sacrifice to a bear — a creature they cannot force out or war with — was really great.

Peterson’s art, as always, is refreshing and lovely. It conveys the right emotion for the story.

Owly is cute and adorable. Who doesn’t love Owly? He just wants his friend to fly a kite. I love the problem-solving and the joys of friendship this story tells children.

Johny Boo is probably my least favorite of the three stories. Maybe I just found it boring? It was the one I felt like I was an adult reading children’s comics. See Johnny Boo run.

Korgi is also cute. I love this tale because yeah, Korgi eats an entire pie and has bad dreams about food chasing him. And it turned into a tale about portion-size, not that you can’t eat yummy treats. (Can you see I’m someone who thinks Cookie Monster should be eating cookies along with his fruit?)

This was a rather amusing version of the Red Riding Hood classic tale. Amusing in that the wolf was essential bored, hungry, and tired of “flea-bitten” sheep.

Of course, the best part is when it turns out that Grandma’s House is not Grandma’s House at all, but Grandma’s Martial Arts School for Young Ladies. Lol. Plus, it’s great to see Red save herself instead of a woodsman, and here Grandma doesn’t have to die.

The anime-style art was interesting, though bland.

This has never been one of my favorite tales. I didn’t appreciate Tennapel’s Ren & Stimpy style art or the level of grossness in the story. Also the only woman character being as dumb as a post was no win either.

The Real Princess by Alesander Grecian

What really drew me into this tale was Christian Ward’s artwork. Yes, this is the artwork so suited for a real princess and I loved it a lot. Beautiful, haunting, and unique. Plus, I’m a bit of a sucker for the watercolor technique.

The idea of true love is such a stable to the fairy tale world. And Grecian does a great job at subverting it. We find out the queen’s married to a frog, the prince marries a cow, and the princess marries a giant. And they’re all happy, which is what’s important.

This story tries to do some word-play, and it just falls a little flat. I’m a little hit over the head with it. When really, it’s not that clever.

Predictably, my favorite thing about this story was Raponsel’s hare. I love her lowering it down by a string of her hair. I love Prince Affable climbing up with the hare on his shoulder. I love the hare hopping into Raponsel’s arms as she comes down the stairs from the tower and out the door.

The illustrations here really stood out. I enjoyed the very street style of it. A nice little bit of a twist on the rhyme making it seem a lot more organic than it is.

The Oni Press Free for All #1

This was probably my least favorite story in the book. The kids were just super annoying. I get what Loux attempted to do by having them interject into the old sailor’s story, but it was seriously trying on my nerves. Maybe if I was younger I wouldn’t find it so? Also the art just really wasn’t my tastes.

This was cute. A tale about a young hungry ghost running around past her bedtime. Very kid appropriate. The art was whimsical and fun.

The Crogan Adventures by Chris Schweizer

This was also cute. A little pirate kid who’s father is the big bad pirate. He goes around with a big mouth, running around the port. He hates the smell of fish because when he gets into trouble, gutting fish is his punishment. The art was okay.

There’s An Ape for That! by Paul Tobin

Cheesy title with a cheeky story. I’m always warning people that apes are evil. No one listens. I’m not sure you can subdue them with candy. I guess my actual issue with the title is this isn’t a story about technology, just genetically-enhanced apes.

The first part with Tony and Richard in their houses sets up their differences nicely, especially for those who aren’t familiar with the characters. Good job with attracting new readers, Marvel.

Also Tobin does a good job with explaining who the Red Ghost is and about his apes in way that doesn’t feel like a bunch of exposition.

The fight was nice and clean. Igor helping them out also puts a nice stand-in for a young reader. Especially when he turns into a little Iron Man at the end. A candy-eating Iron Man.

The Fix It by Todd Dezago

A cute little story about Hulk not being able to walk through doors. He’s just too big. So then when he smashes through the wall, Iron Man’s robots fix the wall behind him. But Hulk just can’t handle that because then he has to smash the wall again.

I liked the beginning of this story a lot. I liked that the aliens were stealing cows, and that a crazy old farmer would dress them in disguises — fake mustaches and hats — to hide them. Cute and cleaver for a children’s story.

However, as a character, Billy falls flat for me. I’ve never been able to suspend my disbelief that a child could turn into an adult superhero and still be able to function. Plus, I’ll never understand why Mary isn’t an adult and remains a super-powered child.

Tiny Titans are always adorable. Beyond adorable. Especially Supergirl and her super pets. I think making a birthday story increases the relatability to children as birthdays are a positive, big deal to them.

I like how Match’s birthday allows the kids to express worry about Superman and Lex being in the same room. And at the Fortress of Solitude no less. And then Match has to choose between their shirts. It almost feels like divorced parents.

The second tale is about a school field trip to the Fortress of Solitude. Also very relatable for children. With Kid Flash and Wonder Girl throwing snowballs at Brainiac.

And then Supergirl invites them all for hot coca in the Fortress of Solitude. But I do wonder why this story is going to be continued in August. May to August seems like a long wait for a kid to finish a story. More likely for them to forget about it.

Batman and J’Onn go on a mission to capture H’Ronmeer, a warrior from J’Onn’s race who’s trying to destroy Earth. I think it’s always interested to have Batman on a team-up. However, I’m not sure you can go into why it’s interesting in a kid’s tale.

Batman solves some of their problems in the end. He certainly goes beyond being J’Onn’s “human pet” as H’Ronmeer calls him. But this tale just seems weak.

Reading Archie takes me back to middle school. Specifically being stuck in my orthodontist’s office and only having stacks of Archie comics to read. And I can’t say that the world of Archie, Jughead, Veronica, and Betty has changed any.

The plot centers around how the private beach Cheryl uses is closed for the summer and she must share the public beach with Archie and pals. Of course, being ultra-competitive with the Riverdale gang, she goes head to head with them in the battle of the band. (Seriously, where does Archie get all these archenemies?)

After some shenanigans, we find out that Cheryl’s a horrible singer. And, of course, everyone loves the Archies. So they play switcheroo on Cheryl and she ends up on the wrong beach for the battle and thus doesn’t ruin the contest. *shrugs* Like I said, Archie doesn’t change.

My one big problem with this comic is the way Parent draws the women characters from profile with their mouths open. They look like ducks.