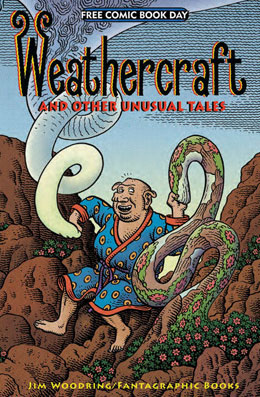 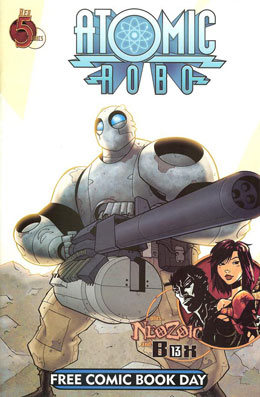 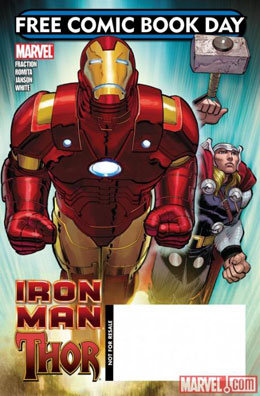 Weathercraft and Other Unusual Tales by Jim Woodring

I can’t say I’m a fan of this. It’s not that I don’t like stories without words (see Owly and Korgi). But I just don’t find the story or the drawings that compel my sensibilities. It felt like Woodring was trying too hard to be weird and unusual. I scrunched my face a few times, but didn’t find anything shocking.

Atomic Robo is here in style. This time, he’s fighting a prehistoric bird. One that’s in a mothering mood. A mothering mood to Robo that is.

I love the over-sized guns and the running around because it’s so Robo. This issue seems a little cleaned up story-wise — that is more all-ages — than Robo normally is. But the humor’s great, and the story has the ending perfect Robo.

I really wanted to like this story. I really wanted to like Lilli. I love women like her who lead and save the day. I love stories with dinosaurs. But this tale felt tepid. I didn’t feel the drama, the emotion, the anxiety over Lilli and Bovi. Mostly, I think their dialog fell flat. That and I wasn’t overly fond of the art. The combination of the thick ink lines and heavy uses of reds and greens made me feel like I was looking through 3-D glasses. (Yes, I know the glasses are red and blue.)

Didn’t I already warn everyone that monkeys and apes are evil?

That said, I also feel like this is story I wanted to like. Like this was a story I should’ve wanted to read more about. But I didn’t. For whatever reason it fell flat. Though I did like the art.

I’m not a big fan of Romita’s art and comic books Thor in general. I was rather disappointed when this was Marvel Comics’ main title for Free Comic Book Day based on those two reasons.

Thor can’t control the weather like a Thunder God should. So obviously something wacky’s going on.

That’s right, Iron Man’s here to say that it’s Luna City, the first settlement of really, really rich people on the moon. I’d like to say it’d be a nice statement about evil corporations if Tony Stark didn’t own a huge corporation. If Luna City wasn’t probably a huge technology competitor to Stark Industries.

The smash-and-bash part of the comic wasn’t very entertaining either. I just didn’t feel it.