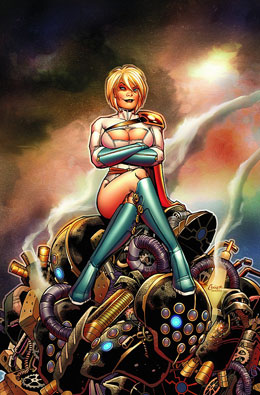 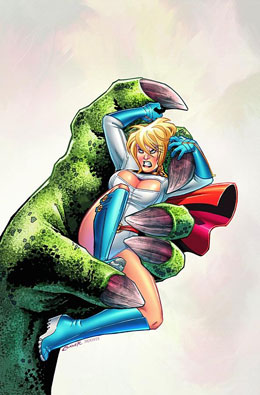 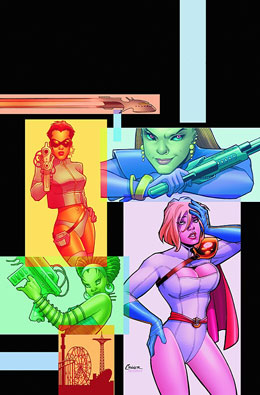 And ending the storyline, Power Girl (with the assistance of Terra) saves the day. Not that I expected any less from her.

The only thing I’m left wondering is Kara’s characterization. As she’s fighting, she keeps saying that she doesn’t want to think about it and she doesn’t want to plan, she just wants to smash. This is interesting since Karen Starr is the CEO of StarrWare. And last time I checked, CEOs had to do planning as running a company takes a lot of that. Of course, smash-and-bash could be her stress release.

I do think, besides the action, this is a comic of slow-growth. And I’m looking forward to layers being added bit by bit. Plus, since I don’t read a lot of DC, I don’t know Power Girl as well as I’d like. This is really my introduction to her, and so far, it’s been enjoyable.

This is great. I loved seeing Kara and Terra out on an all-girls movie night. The writers did a great job at showing how someone who’s not from civilization as we know it would probably freak out at a horror movie, not fully integrated into knowing that it’s fake.

I’m loving Amanda Conner’s art. She draws the characters with such a refreshing viewpoint, while keeping their iconic looks.

Kara’s cat is hilarious. And, of course, there’s always a catch to the perfect apartment. Just the superhero kind instead of leaky pipes or mold. But it wouldn’t surprise me if we eventually saw that too.

I have three nice things to say which earn each She-Hulk: 1) I’m glad Kara got her perfect house; 2) I love Connor’s art; and 3) Kara’s cat continues to be hilarious. (I know, we don’t have to count how many times I totally become in love with a story due to character’s pets or talking animal worlds. See: Pet Avengers, Watership Down, Milk Treading, His Dark Materials, etc.)

Overall, I feel like this hot pirate babes from space crash lands on Earth while being pursued by a bounty-hunter shtick has been done to death. I kind of don’t care, and just want Kara to go on with her life. The plot feels too forced.