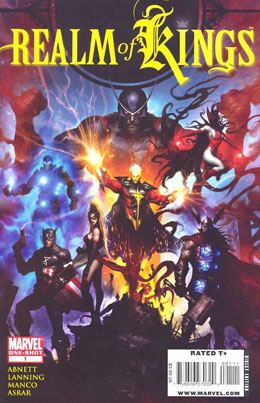 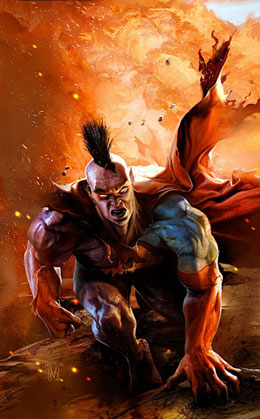 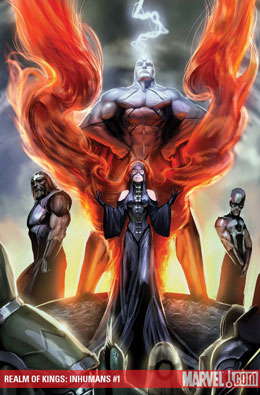 Realm of Kings by Dan Abnett and Andy Lanning

I really liked the cover art and was hoping for a really interesting alternative universe. Abnett and Lanning did not disappoint.

I don’t know much of anything about Quasar, so I wasn’t particularly affected by him being corrupted at the end. I also didn’t fear for his safety or have any of the other feelings one might have when a beloved character’s in peril.

This is a very classic sci-fi story about a dimensional rip and an alternative universe coming to eat it. The whole cancer metaphor just reminds me of the literal cancer in Gail Simone’s All New Atom.

Overall, it’s a very good set-up story. The bad guys are your friends with the goatees, and you’ve already figured out what their weakness is. The weakness just isn’t very strong. And of course, now you’ve been corrupted too. I think it’s also one of the spookier stories out there currently on the market.

Of course, while it’s a one-shot and I’m sure everyone’s going to team up to fight the Marvel Mirrorverse, I’m not sure why it was a one-shot…

This was really awful. This was perhaps the worst comic I’ve read in a long time. It was boring. It was too long with too much narrative. I didn’t care about the characters. I even like Gladiator and I still didn’t care.

Realm of Kings: Inhumans #1 by Dan Abnett and Andy Lanning

Stories about the inner politics and working of the Inhuman royal family easily entertain me. I don’t think this issue was stellar, but it was entertaining and did some checking in on everyone’s emotions.

I like Gorgon as the angry hero who’s winning the favor of the Kree as he kills the Negative Zone invaders. Medusa as the strong, grieving widow who’s raising her son to take the throne her dead husband left also works really well. I’m glad she’s not at 100%.

Crystal and Ronan the Accuser are just cute together. I like how he’s always trying to win her affection. (Seriously, he’s such a better match for her than Quicksilver ever was.) I’d love it if Crystal had her own book.

I do wish they’d put Max back in his mad scientist role. He gets so boring as the never going to be king so he’s whining and plotting younger brother. Max’s talents are put to better use elsewhere. They still haven’t figured out how to fix the Kree’s genetic problems, among other things. There’s a whole world of plot Max could have besides the schemer.