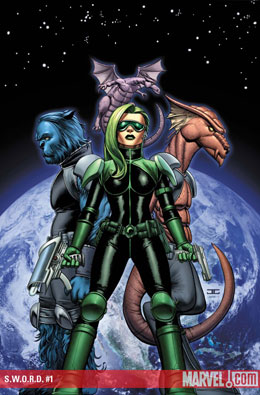 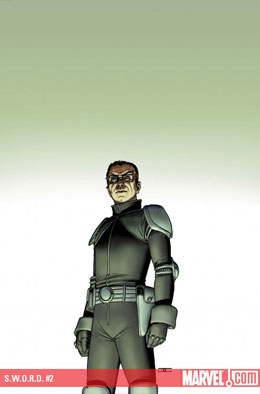 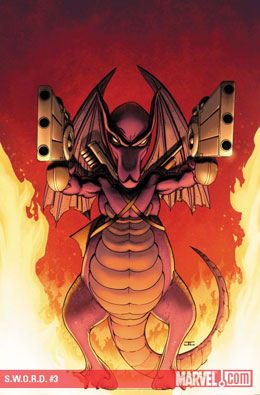 I’ve had my ups-and-downs with Joss Whedon over the years, but if there’s one thing he can do, it’s create an interesting character. Agent Brand’s a good one. I’m so happy she gets her own comic, because really out of all the Marvel comics, there needs to be a human (or half-human in Brand’s case) in space story. Plus, I’ve really enjoy Gillen’s creator-own comics.

The bits that play with gender roles in the Beast-Brand relationship work really well. Gillen doesn’t forget that Beast’s a scientist or that Brand does have a soft spot for Beast. He’s just her blueberry muffin. Adorable. But in all seriousness, it does take a special kind of mind to be able to work day-in and day-out with your significant other, especially when you’re in life-threatening peril.

I like Brand’s background being explored not just in dialog with Beast, but actually having her half-brother show up. There’s more of that showing, not telling.

This comic’s really great. I highly recommend it for anyone wanting to pick up something new and awesome.

To say nothing of Gyrich’s ethics, it was pretty impressive that he rounded up all the aliens in the short time Brand was otherwise occupied. That’s some efficiency.

The fight with Death’s Head was ridiculous. But I imagine any fight with a giant robotic bounty hunter is bound to be on the silly side. Gillen seems to be having a lot of fun writing both Brand and Beast. Especially their witticisms in the fight.

I love Beast continuing to be the sentimental one. Him insisting that Lothi have a picture of him and Brand was priceless.

Steven Sanders’ art is a great match up for the tone of this book. I’m really looking forward to the next issue and more of Brand being awesome and yelling at Gyrich.

Seriously, Marvel? Seriously? You’re going to kill an awesome title without even giving it a chance to grow in the marketplace? Without it trying to find its audience fully? Not even enough to really justify one full trade? Not giving it two story arcs? This fucking amazing comic? One that’s better than 95% of the titles you have going? /end rant

Of course, Gyrich wasn’t going to take much time before locking up Beast too. But I loved Gillen using him as the POV who can’t really do anything drastic to save everyone. Beast’s conversation with Brand and Karolina begging him to let her go worked brilliantly.

I loved that they left capturing Lockheed until the last moment. I love his little basket, and how he immediately causes a fire.

And, of course, the Unit plays the side his thinks is more valuable to him: his own. I did love his origin story. His advice to Gyrich makes perfect sense given the Unit’s mission. If the ends justify the means, then it doesn’t matter that Gyrich just destroys alien life to “keep the peace.”

Brand’s characterization comes out perfectly in her escape: hiring Death’s Head and then going back to rescue the Metroliths. Also loved Beast asking her to marry him. He’s so happy to be doing good again and saving people. There’s a mission.

I hate Marvel so much for canceling this title.