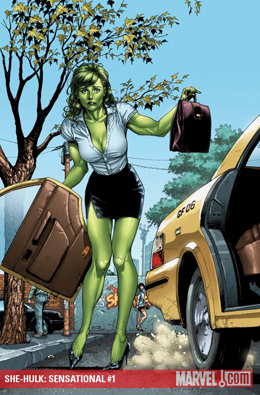 She-Hulk turns 30 this year. And of course, since her character’s off playing dead in the current Fall of Hulks saga and Marvel marketing wanted a story, editorial decided to give us some flashback tales. The first is done by David, She-Hulk’s last writer, and the second by Reed, who’s last endeavor was the recently canceled Ms. Marvel.

The issue also reprints Sensational She-Hulk #40 written and drawn by John Byrne. While I’m glad they didn’t reprint Savage She-Hulk #1 again, I think this story was a poor choice. Mostly because no one will get anything but the infamous jumping rope scene if they haven’t read the previous issues of Byrne’s She-Hulk as it’s all a bunch of references backwards. It needed a stand alone story.

Anyway, onto the new stories, which both get a 3-star rating for different reasons…

“The She-Hulk Story that’s a riff on Christmas Carol”

Okay, first, we all remember when I swore off reading David’s comics. Obviously, I’m a liar, who lies, when it comes to new stories about my favorite character. However, this does not mean I’ve forgiven him. But I do have to give him some props for writing a story about her anniversary, and it being relevant to the celebration.

David-ian ways this comic annoys me:

1) Stereotypical woman worrying about turning 30 and growing older. Almost forgivable in that She-Hulk does have her shallow moments. However, it’d be nice to have a story about a woman embracing her age rather than freaking out about it.

3) Creator appearances. Just a pet peeve of mine to have have Stan “The Man” Lee and Dan Slott appear. Perhaps a better question is, why didn’t Slott write a story for this?

5) The Misstro! More lazy writing from David. Bad enough Mark Millar wrote crazy insect fanfiction between Jen and her cousin in “Old Man Logan.” But David gets to reference his own tragic crap Marvel passes off as a Hulk classic. If we’re making a Maestro equivalent, why doesn’t the Misstro make her sex slaves that look like Pug rape Jen? Though I do have to say that’s some better use of hero parts than Rick Jones’ creepy collection.

6) Resolution, what’s that? Moral in a morality tale, what’s that? Apparently, She-Hulk hopping out of her own birthday cake — like a stripper — is the moral? (Yes, feminists have no humor. Why do you even ask?)

I thought Meyers’ art was hit or miss here. Sometimes I found it fun — though I’m not sure he knows how to draw a woman with muscles — and other times it looked unfinished. Especially in the parts lacking backgrounds.

This felt like an issue of Ms. Marvel, and it would’ve made for a fine, mildly entertaining Ms. Marvel story. However, as part of an all She-Hulk all the time collection, it feels off. Carol and Jessica are more the stars of this tale, and Jen’s just kind of along for the ride. And some punching. Sure, she’s pals with Carol, but even the friendship focus was more Carol-Jessica.

Part of the problem is that Reed’s not suited to write She-Hulk. Which is okay, not every writer is. She-Hulk tales are quirky, break the fourth wall, use out-dated characters. They aren’t the type of stories Reed writes. And this was definitely a Reed-story.

The other part was it was rather boring.

Carol stops a bank robbery. Discovers it’s Jessica leading the robbers. Jen gets information about a Hydra cell and how it’s related to a bank robber. She goes on a stake out and mistakes Carol for the bad guy. Cat fight. Then Jessica sorts it all out by revealing her double-agent status. (And of course, this isn’t the real Jessica; it’s actually the Skrull Queen, which is why she doesn’t care about your puny human laws or want Carol’s (and Jen’s) help.)

They then bust a Hydra cell, which is surprised when these women turn out to have superpowers. Comic ends with bad guys being hauled away and Jessica and Carol hugging before all three head home.

Yeah, what did Jen do again?

Overall, what’s wrong with She-Hulk Sensational #1 is the lack of true stand alone stories about Jen. The David story references She-Hulk’s past continually and when David tries to be most amusing, are it’s most referential points. And Reed’s story, besides it’s off point-of-view, also doesn’t seem as layered without knowledge of who She-Hulk, Ms. Marvel, and Spider-Woman are, including their backstory relationships with each other. This issue is not for new readers. And that makes me sad considering how many times I’ve rec’d She-Hulk to people.