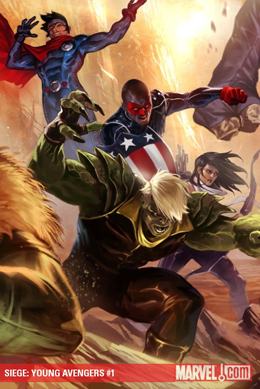 I liked this comic a lot. I miss the Young Avengers, and this tale felt like a breath of fresh air into their mythology. I haven’t been reading the Siege title or tie-ins in comics I don’t read. But these big action comics have more punching than story. Which is part of why I love McKeever’s character-based story.

Wiccan admitting to Hulkling about his Norse obsession and his connection to his father. The story was touching. And it made sense when Wiccan went after the Wrecking Crew like he was Thor-himself. Certainly the Young Avengers could take out some D-list villains. My only picky point is why didn’t we see a kiss between Wiccan and Hulkling? I mean, straight fanboys’ eyes aren’t going to melt if they see two male characters kissing.

Speed’s story was a nice character development. I like him willingly helping. In fact, he’s more than willingly helping, he’s slowly driving himself nuts trying to save everyone. Trying to find every survivor. Ronin’s mentor moment with him was perfect.

Patriot and Hawkeye’s kiss doesn’t surprise me. The trapped together underground just accelerated their already brewing tension. (And the poor Young Avengers get so few stories their tension has been running for years now.) Kate always knows how to push Eli’s buttons. And she pushed them just right.

The other missing element was Statue and the Vision. I know they’ve been involved in other comics, but it would just have been so nice to see the entire team together once again.