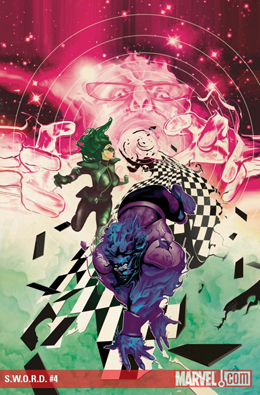 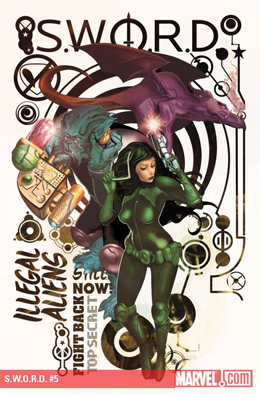 This continues to be an awesome comic.

I loved Osborn butting heads with Gyrich over Venom. It’s nice to see a realism in that different branches of security clash with each other. Especially when you’re dealing with egos who know they’re right.

Oh, the Metroliths. They are dumb, but well-intended in their rescue of the faces on Mount Rushmore. I mean, how could we decapitate our Presidents. Wait…

I love that when stressed Beast tells Brand to talk to the Metroliths in “your heathen space-gobbledy gook.” Though it is interesting to see him being more stressed while fighting than when repairing an almost exploding ship. There he’s very calm and rational and making jokes about sharing a bathroom with Brand. (Which yeah, Beast would have way more product than any woman.)

Why does it not surprise me that the Drenx were plotting something. It was ultra suspicious that they took so long in their negotiations, and that Gillen kept refocusing on them as Gyrich locked up all the alien staffers. Of course, Lockheed to the rescue. The Drenx never suspected that. (This part really reminds me of Babylon 5 and makes me want to watch it again. Of course, Brand in charge is rather like if Ivanova and Garibaldi had been in charge the entire time.) Something tells me that Brand’s going to deal with the Unit once and for all. I love the “to be concluded” part.

First, I love this cover by Mike Del Mundo. Why didn’t they put him on as cover artist right away? I mean, covers draw in readers and this is interestingly awesome.

I think Death’s Head’s expressions are some of my favorites parts of Sanders’ interior drawings. Also Beast’s smile. It’s so fun, and I think I already miss this comic. Miss it so much. Poor Lockheed has to make his own splint. I love the detail of the little strings he pulls on with his mouth. So cute. He’d probably light me on fire for saying that.

Agent Brand’s so awesome. She retakes her own station when she’s been kicked out of office and put in jail. She overtakes it with firepower, planning, releasing her fellow prisoners, and by convincing the Drenx that Beta Ray Bill will kill them. And, of course, the Unit is on Brand’s side. For now.

I love Gillen’s writing here. I love his Brand, his Beast, their snark, their world. I love this title so much. I’m so sad this series was canceled.