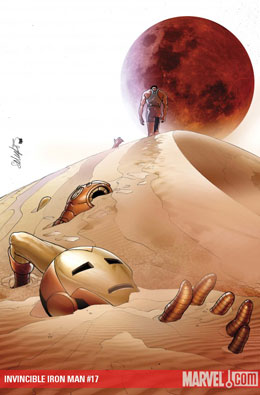 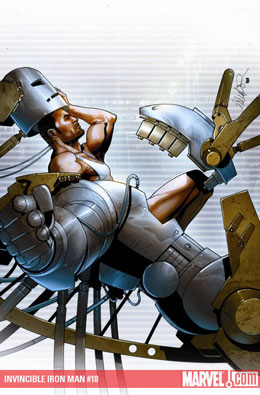 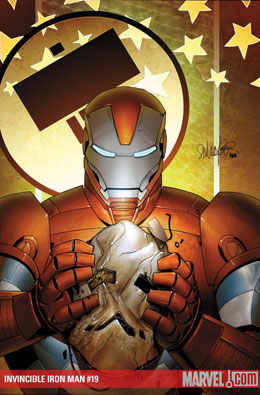 This issue feels like filler. The kind where a side character (or two) are kidnapped to motivate the hero. I kind of hope that Tony Stark, before he fried his brain, set up some special mission that involved Maria Hill, Pepper Potts, and the Black Widow playing bait.

I generally like Fraction’s stories, but I had a hard time with this issue.

This issue was awesome. I was genuinely surprised when Pepper Potts reveals herself to be hiding in Madam Masque’s outfit. (A lazier writer would’ve had Bucky rescue them.)

The scene with Victoria Hand, Madam Masque (really Pepper Potts), Black Widow, and Maria Hill was really written for me. Seriously, four women being awesome by doing what they do as professionals. This is why I keep reading this comic.

The scene with Tony being shot by Afghan teenagers(?) did an interesting job in highlighting what a survivalist Tony Stark is. Even with half a mind. I do think it might be foreshadowing just why Tony Stark is going to survive the whole ordeal.

I also enjoyed the bit where clearly Walsh recognizes Victoria’s savvier than Norman.

Fraction’s Norman is perhaps a bit crazier than others write him. I don’t know if it’s because of Norman’s obsession with Stark or because this comic really doesn’t have to show Norman being H.A.M.M.E.R.’s director and leader of the Dark Avengers.

Comics are always really enjoyable when the hero bests the villain in a complex way. Of course, Tony’s brain’s now officially inactivated.

Norman’s plan to just beat Tony to death — and his sheer glee at it — worked really well. Nice to even see Victoria marveling with just how chipper Norman was. And also good to see it disappear once Tony was apprehended.

Maria’s (and Natasha’s) ability to just walk about the building and still command the respect of the soldiers really speaks volumes to how Maria is a good leader. (Especially given how many people whined about her taking over from Fury.)

I think I’d be happiest if Thor just stayed in his Dr. Donald Blake persona.