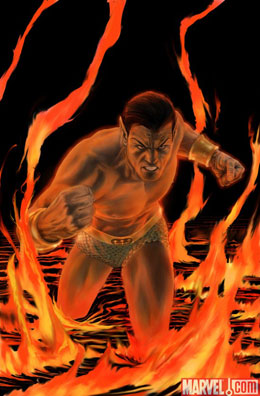 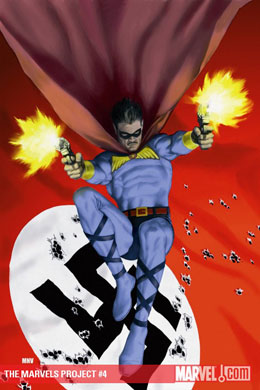 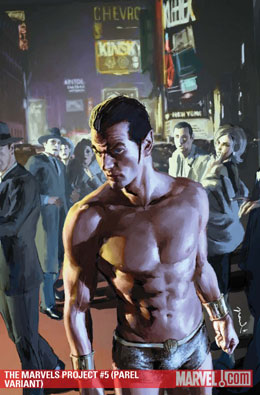 The Marvels Project #3 by Ed Brubaker

As the issues before it, The Marvels Project is a very solid book. Well-written, intriguing, great art, and colors. I’ve enjoyed Brubaker’s fascination with Golden Age characters and storylines. The research about 1940s is impeccable. The whole book feels like a transport back in time. There’s a sense of anxiety with humanity about the rise of the superhuman, which is perfectly meshed in with the fear of WWII.

This is a book about the baby-steps of the first heroes. About Namor and the Human Torch fighting over New York City, which the city is featured in about 90% of all Marvel battles. The ole tyme delight of Coney Island is beautiful. I even like Nick Fury as the up-and-coming spy and solider. Definitely a lovely read.

The Marvels Project #4 by Ed Brubaker

The story of Steve Rogers becoming Captain America is one of my favorite Golden Age re-tellings. The art student who became a super hero. I think his story is quintessential to the decade. For a school assignment, I once had to interview my older relatives about World War II. My grandpa was 14-years-old when the majority of the draft took place. Too young to join, and everyone in his small town knew his age. When he told me that story, my grandpa was still disappointed he couldn’t join the war effort.

I like that Brubaker takes the chance to the tell the story of Heinz Kruger, the Nazi spy. Usually, other stories are so focused on Doctor Erskine’s assassination or Steve’s transformation, they ignore him as anything more than the spy holding the smoking gun.

When the Ferret was killed, I thought it was very touching that Dr. Thomas Holloway takes his pet ferret in. He seems like a person who would get along well with a ferret.

One thing I am a bit disappointed with is the lack of inclusion (so far) of the first Captain America, Isaiah Bradley. My biggest criticism is that this comic is very white and very male. I know the comic reflects the comics written at “the time,” but Isaiah’s presence would be a nice addition. At least to show that sometimes the good guys aren’t always that good.

The Marvels Project #5 by Ed Brubaker

The writing seemed a lot tighter in this issue than in the past. Of course, it really only focuses on Captain America’s “birth” and the Nazi plot to steal and destroy Erskine’s work.

I really like the idea of The Angel being on the tail of the Nazi spies. I love his acknowledgment of Steve being a real marvel, and how he attempts to help, but then realizes he’s not needed.

Overall, I don’t have much to say about this as it’s quite good.