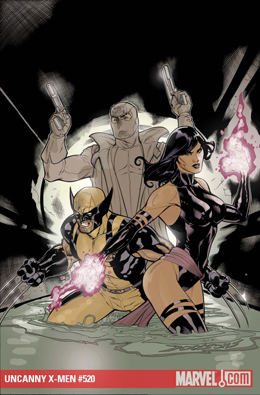 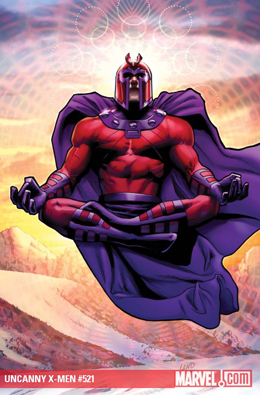 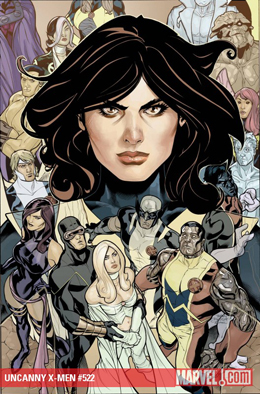 Yeah, this is a title that after this storyline (6 of 8), I’ll be collecting in trades. It’ll probably be more satisfying that way.

I did like Fantomex killing Predator X before Wolverine, Colossus, and Psylocke could. Then blah, blah, blah, storming the castle of the bad guys. That’s supposed to be Mastermind, right? Since yay for labeling all of the characters — a big need considering 1) X-Men too numerous for everyone to remember and 2) Land’s art — but not the labeling of Mastermind. Maybe that’s supposed to be the big reveal? To have Wolverine growl his name and ask when he came back from the dead?

Magneto and Namor are awesome as usual. Cyclops being all bitchy pants mcgee and throwing out Magneto is so going to bite him on the ass. Especially since everyone — Emma, Professor X, etc. — disagrees with that decision. I love how Doctor Nemesis just replaced Beast.

Next time on X-Men, Magneto does yoga.

Hold on a second, Magneto’s doing yoga so he can pull the Kitty Pryde filled bullet/bomb to earth? Does this mean he’s out to destroy earth again? Or does he believe only Kitty can save mutant kind? Is Kitty everyone’s magical Mary Sue fix?

While I found the main battle pretty boring, I did find Fantomex’s fanboying of the X-Men hilarious. I love how he’s too snobby to say he wants to join them, but then puts himself in the group. Not just as a new person, but as the one driving the Blackbird.

There were two really well done things about this story. The first being that all the various teams/elements of who the X-Men currently are came across well. They all worked together. Okay, Magneto started pulling Kitty and the bullet toward Earth without consulting anyone first. But in the end, they all worked together. Kitty’s return brings them together in a way they, arguably, haven’t been together since she died.

The second part I really enjoyed was the twist. That Kitty’s intangible and seemingly permanently phased. Now I don’t think it’ll last, but it does add another layer of tragic to her story. She’s probably just stuck due to being phased for a long time.

And I think Fraction’s back-up story “The End of the world and Everything After” brings the impact of Kitty’s sacrifice to light even more. Simply following an alien we’ve never met whose world’s doomed by the bullet, but then saved by Kitty, works really well. Plus, Jimenez’s art’s brilliant and expressive.

That said, I am stopping here reading Uncanny X-Men in single issue form. I’m not interested in collecting another event, at least in single issue format. Plus, Fraction’s stories always read just a little bit better when I can cruise through a storyline.