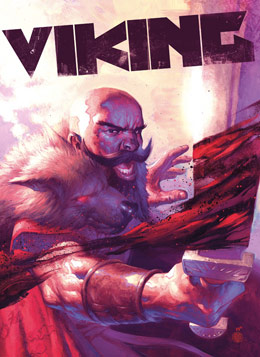 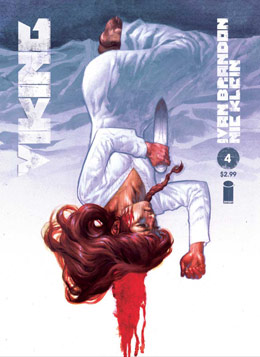 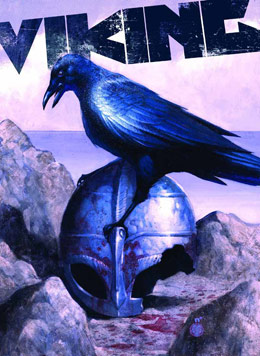 I think the cat is my new favorite character. (And it’s not even a magic cat trying to join the Pet Avengers.) The ale-drinking kitten for the win.

I wasn’t too big on the second issue as it didn’t live up to the first issue, but the story seems to be picking up here. I’m glad to see that Princess Annikki is going to be a bigger feature in the story. Of course, there’s no way that I can ever see her being a damsel-in-distress or a quiet hostage.

Nic Klein’s art in this remains my favorite thing, and my main driver to continue reading this comic. I love the layouts in this extra large format. This cover is probably my favorite so far. (Especially since she isn’t dead, and it’s more symbolic rather than literal.) The art in this issue didn’t seem quite as refined as the others, but still is the comic’s shining star.

The story itself suffers from too many characters with not enough established characterization. I’m constantly having to re-read the older issue (slow release doesn’t help) and not because I’m joyous re-reading a story I love, but because I can’t keep the characters straight. I’m hoping the battle helped thin the character herd. They are vikings after all.

I really loved this issue. It really showcased all the characters and their different predicaments. It worked extremely well as a “season ender.” I hoping there’s more coming down the line, but this might have to be a title to pick up in trades. (Of course, that’s if this title’s sold enough in order to make it to trades.)

While I’m still not really clear on what’s going on at the castle itself, the stories of Anni and King Bram being held hostage comes together well.

Finn and Annikki’s storyline was my favorite. At first, I was a little gobsmacked at how quickly the plot moved along, especially Finn’s quick recovery from an almost fatal stabbing, but then I figured the story took place over the course of weeks. I liked how they gained affection for one another. I liked how Anni saw a free spirit in Finn and how she saw him as weak, even though he was one of her and her father’s captors. I liked how she ployed Finn to get his knife, and he knew it. How he asked her to stay. Clearly, she would’ve if her father hadn’t been there too.

Orm seemed really at peace out there hunting for deer. Apologizing to the deer before he killed it for food was a really nice touch to the story.

Egil and Bram’s stories were the least intriguing. Bram is correct in that Egil is a common criminal and that he’s the one who got his brother killed. However, Bram should learn some compassion. I supposed in the end, he did have compassion. Not to kill Egil, just burn the side of his face instead.

Oh, Viking, what are you going to do next?