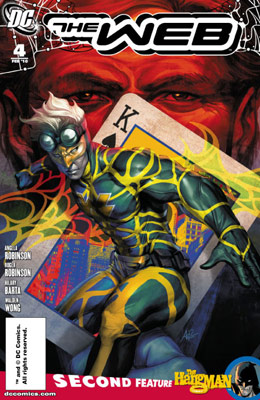 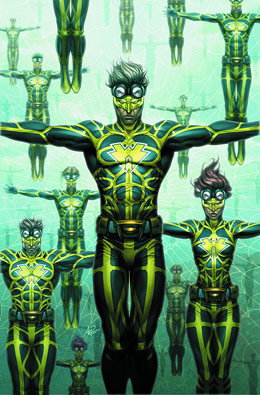 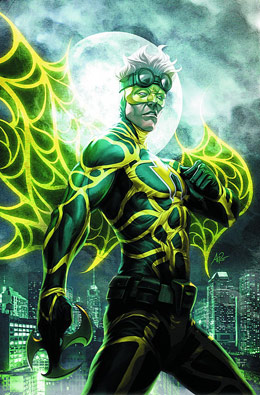 I really liked the twist on the revenge story. How John couldn’t murder Deuces Wilde, because Deuces knew the future. Really takes the bite out of the revenge. That and John’s essentially too good of a person to kill someone.

I wish April’s role had been more than The Girl turned The Mother of Orphans. Blah.

There’s nothing funnier than Web Team infighting. Once again, Robinson showed her true knack at writing with John getting put on hold while he’s trying to disable Gary, Cecil, and Carol’s suites. Too freaking funny. Also his threats to sue for copyright infringement. These moments make me sad that Robinson will not be continuing with this title.

I do think the story arc ended on a perfect note with John answering his hero’s inbox.

I like this idea of John’s outsourcing biting him in the ass. Of course, it would have to be something as harsh as an operative dying for John to take notice. (He certainly didn’t seem to the learn the first time around when his Web Team started guarding bad guys and fighting against him.) Not that I’d blame him for not wanting to go to Detroit.

While Guggenheim tried his best to flesh out Mateo Burland, but it’s hard to find sympathy for him when his hard-nose crime boss, Amado Santana, calls him a cold-blooded assassin. John doesn’t find killing on Mateo’s record; but even there, John assumes Mateo’s sealed juvenile records would show murders. (Which, point to pick, wouldn’t Oracle’s super-duper hacking be able to see juvenile records too.)

Of course, then Guggenheim goes and fridges Mateo’s sister, Nina — first by having her shot and then her ultimately dying in a high-speed car crash. Clearly, Gruggenheim does this so we feel even more sympathy for Mateo. When John tells him is not Amado’s fault Nina’s dead, but John’s and to meet him up on the roof for a final killing, I shook my head. No, the fault laid with Mateo, who became a heroin dealer and criminal. Yes, he wanted out on his own free-will, but nothing added up. There is no excuse fridging, even a one-shot female character, for emo.

This was a really disappointing comic. The art wasn’t very good, and the writing played heavily with virgin/whore tendencies and John thinking too much with his dick. And okay, maybe that’ll come to bite him in the ass in an ironic way (like Robinson did when she wrote the title), but somehow I’m not waiting around to see.

First, John meets up with Patricia Fletcher, client. Patricia, who’s rich and a blonde bombshell, says her elderly grandma was murdered by a villain known as Stunner. John doesn’t do much besides nod and run away before Patricia figures out his secret identity. (Has he already slept with her? Or is this just a rich people know each other thing? Which is why Batman saving poor people is brilliant as they won’t ever truly know who he is.)

Then there’s Stunner. I’m surprised she beats John considering I’d be really worried about my boobs popping out of that dress if I was her.

They fight. And they fight some more. Seems like Stunner might beat John in his own lair. But then she suddenly dies. And I’m wondering if I care. Oh, wait, I just care enough to remove this comic from my pull list.