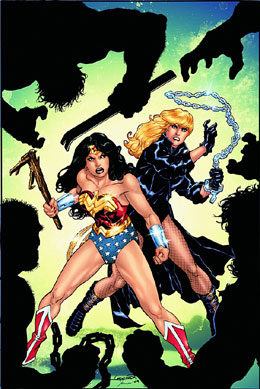 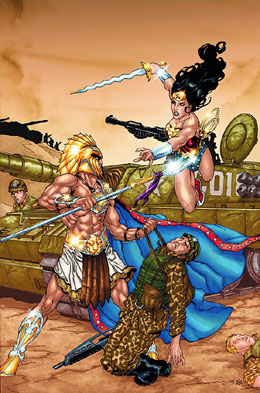 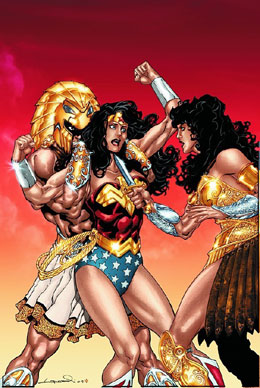 As this comic starts off with Wonder Woman interacting with adorable polar bears, how could I not love it? It’s like Gail Simone wrote it for me.

I am interested to see what happens between Diana and Tom, but there’s going to be some waiting.

Diana interactions with Dr. Morrow highlight everything I love about Wonder Woman’s treatment of villains.

I love the commentary on female superhero costumes and their showiness and impracticality when Diana and Dinah are putting together their undercover costumes. Wedgies, breakneck boots, and cleavage all over the place. Of course, Diana’s costume makes her looks like she’s a lion tamer in a circus and Dinah’s like a reject pirate from Vegas’ Treasure Island.

For an issue with about four plots in it, Simone’s writing was extraordinarily tight. I really think Diana being exiled from her people, fighting with her exiler (Achilles), and being dumped by Tom really gives her a human edge to identify with. I felt a lot of empathy for Diana in this issue.

Diana’s fight and then chat with Giganta was great. It really showed how both the exile and the breakup stories are universal experiences.

The scenes with Tom were bittersweet about their relationship and lost potential. Again, I really connected with Diana when she and Tom reached their moments of truth and found they weren’t on the same path. I’ve been there, done that, and unfortunately, didn’t have a lasso of truth to help guide. Minus the superpowers, this could’ve been one of my former relationships. 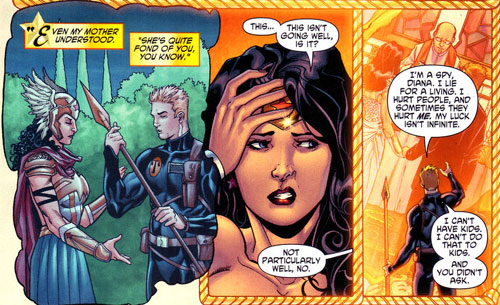 Diana realizes she and Tom aren't on the same page.

It was great to see Diana come to the conclusion that if the Amazons are going to continue as people, they need to expand their numbers and one princess marrying and having a baby is not going to do so.

Back on Themyscira: so Alkyone and Achilles’ marriage is to be each other beards, yes? And I’m looking forward to seeing what these Amazon’s births are about.

Glad to see that Diana still got to kick some Achilles’ butt. Yes, she’s a way better person than anyone else in her world, even when she’s making mistakes.

I noticed the art change a lot. Perhaps too much. I do really like Aaron Lopresti’s art, so it could just be my bias. Don’t get me wrong, Bernard Chang does a good job with the art. Just a change.

The emphasis on Diana’s war side is nicely played. It’s very her that Ares haunts her dreams. So Diana.

Of course, Diana goes back to Themyscira. Everyone saw that coming, and they were prepared to send an angry and mentally messed up Donna at her. The fight with Donna really highlights Diana’s emphasis on both mercy and family ties. It made for one of my favorite scenes ever. 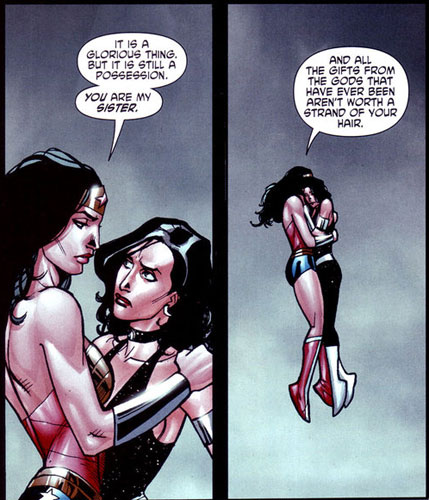 While I’ve enjoyed a lot of the plots and character-building Simone’s done on her Wonder Woman run, I really think this arc so far has been some of the best writing of Diana. Ever since she killed Maxwell Lord, there’s been a running theme of Diana trying to find her identity, and I really think she has found exactly who she is. Diana’s life may be in shambles, but she knows who she is now.