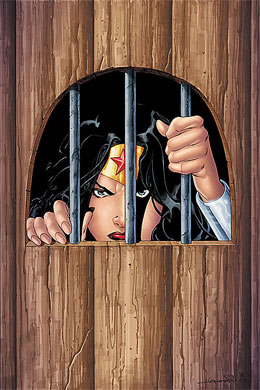 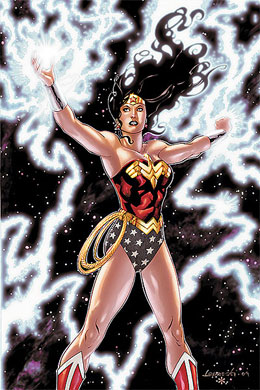 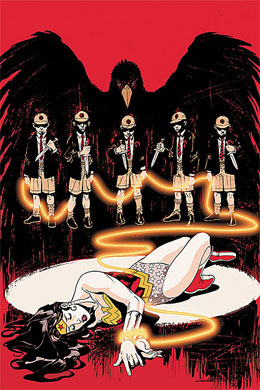 This is why arranged marriages never work. Just kidding. Actually, it was pretty obvious Achilles realized just how batshit crazy Alkyone is. And she was double-crossing him as well. Of course, the men teaming up with the Amazons (and the Gorillas) will probably just be the bonding they need to get along. Until Zeus comes back anyway.

Hippolyta as Diana’s weakness works really well with showing their repaired relationship. I loved Artemis trying to break Diana out. Even without her gear and with a magical lock, Diana probably could have found a way out of her prison on her own. Simone used Donna brilliantly in this.

I’m really digging this look into who Diana’s father is. Could be an interesting spin.

What happened to the pregnant Amazons in the battle? They just disappeared. The ghost of Ares has their boy children, but didn’t anyone notice them in the battle?

That said, I loved Artemis leading the Amazons into the water to save Diana. I loved the creepy monster lurking under Themyscira. Like a monster-under-the-bed story that you tell children to be wary of, which is actually true.

At this point, I actually feel bad for Achilles. Maybe they’ll find a spell to stop the Gorgon’s powers.

Of course, the ending is happy for Hippolyta and Diana’s reunion. They always are reunited.

Zeus can kind of just go away now.

I loved this issue so much. Simone encapsulated all the best sides of Diana in this issue.

I also love Diana’s scene with Etta and Steve. Etta is so awesome. She’s an incredibly realized character in that she’s made herself the star of her own world even with her husband and best friend being important heroes. And, of course, she’s going to feel bad about not telling them about being involved in Checkmate. I also love Diana feeling bad and wanting to be a good friend.

The manipulating “children” remind me a lot of the Hansel and Gretel episode of Buffy the Vampire Slayer where evil spirits raised havoc about witches. Hopefully, Kara and Diana won’t get burned at the stake like Buffy and Willow. But does that mean Etta’s getting turned into the rat?

Love seeing Kara versus Diana and how much Diana cares about her. (Which actually does fit nicely into Diana’s theme of love over in the Blackest Night crossovers which don’t touch this book, thank the comic gods.)