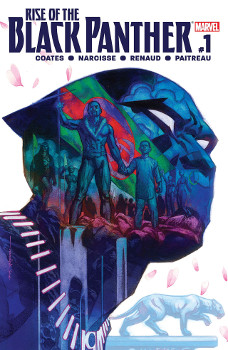 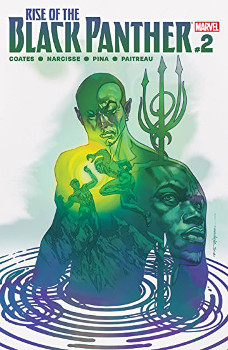 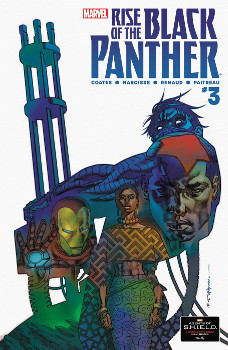 Sabino sure had his work cut out for him. There was so much text here. So much. Gobs and gobs and gobs of exposition.

It wasn’t that Narcisse’s storytelling was boring. But there was no relief in the art. There was no white space. There was nothing, but an assault of text walls. I get that we needed to tell the story of Azzuri, T’Chaka, and N’Yami, but there has to be a better way when using a medium that has a major visual element.

I get how this book is establishing T’Challa as a different Black Panther than we saw in the movie for maybe people who’ve picked up this book after the movie. (Though I’d bet most all of those were already regular comic book readers who maybe the movie got them more interested in Black Panther as this is comic book marketing we’re talking about.) A T’Challa who wasn’t a completely grown man when his father died is definitely different.

What a wasted scene not to see N’Yami’s black wedding dress on her. I get that there was the echo when T’Chaka remarried to Ramonda, but seriously missed opportunity for fashion. Which lack of fashion is perhaps one of my top five complaints about superhero comic books in general.

I’d actually kind of hoped this would’ve been a book about T’Chaka and N’Yami’s relationship. Alas, not so much. Unless you count T’Challa as the personification of that relationship.

When there’s a battle to show the greatest warriors and a person in a mask, we should always assume its the prince or princess. Common story trope. Plus, with Wakanda being a closed and secret country at that point, it’s not there were many choices on who it could be.

I liked the team-up between T’Challa and Namor because they are different types of kings. The same way that T’Challa is different from his father T’Chaka and his uncle S’Yan. I wish there’d been more of those contrasts.

Instead, this book was full of more exposition and more text. It’s great when you want to share details as you’re excited about a character’s history and who they are, but this would’ve been better served with a hard edit.

This issue was slightly better. Or maybe it’s just because I love the Winter Solider.

I thought the art of Winter Solider’s stealth gear was really smart so we identified him, but his overall identity was kept pretty secret from the other characters. The black colors with the spots to create a distortion field were excellent. This isn’t a new technique, but it felt fresh here.

Rise of Black Panther is the oral history of Black Panther and Wakanda. It isn’t written like a comic book, but more like the explainer guides you used to get. Or some of the dense text-filled issues of bygone days when no editor trusted a reader to remember anything and expected anyone to jump in at any time.

I don’t know what I expected from this book going in. I believe it ended up on my pull list because I’m subscribed to the main Black Panther title. Or maybe I just hoped we’d get another World of Wakanda.