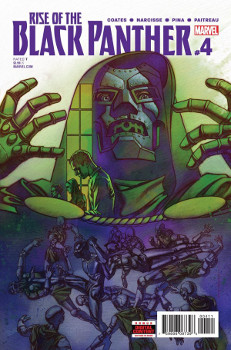 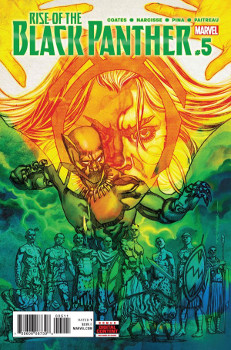 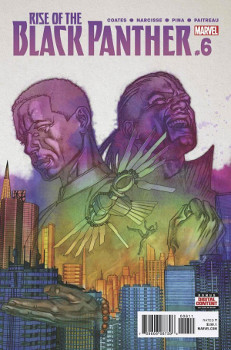 It’s never a good sign for a book when the artist spot appears to be rotating. Either it means it was rushed, or it was behind, or Marvel didn’t have enough faith in the book to dedicate a full-time artist.

I do like Pina’s art better than Renaud’s if I have to choose between the two.

This book’s major problem is that it’s trying to tell all of Black Panther, at least around T’Challa, in a very condensed manner, and the pacing made no sense. We spent this entire issue dealing with Doctor Doom and in Latveria.

While I know this is supposed to be sewing the seeds for N’Jadaka and the White Wolf’s story and their discontent with T’Challa on the throne, I cannot help but think of all these threads lying here. All the statements this book is trying to make about showing the coming of age of T’Challa and the barely-there story eeking out.

But I do appreciate Shuri being the one to sneak around Latveria.

The excessive dialog and the changing of artists are killing me. I’m not a fan of the style of whoever did the art in the second half of the book. It wasn’t as smooth, and there was a huge noticeable change mid-book. I don’t know why Marvel (and DC) think that this isn’t distracting for readers.

The White Wolf isn’t actually bad. It turns out Wakanda just needed a double-agent to do its work. I think it’s interesting that colorism is brought up, but again, nothing is stated about it.

The entire flashback with T’Challa in NYC and meeting Luke Cage seemed like time wasted just to explain a turn of phrase T’Challa uses. Like why do we need this?

Of course, Storm and T’Challa are immediately smitten with each other. This is precisely how their romanced worked. I do appreciate that Narcisse does keep Storm with her own agency and her powers. She doesn’t need T’Challa to save her. In fact, he needs her in order to fully complete his mission.

This vibranium hulk was pretty boring.

Killmonger is just gross. I assume those are femur bones in his collection since most bones in the human body aren’t that large.

This issue is beyond predictable. I mean, this entire series is framed around how T’Challa became king and a hero/superhero. So, it’s not like we expected anything but the patent happy ending.

In the end, it’s Killmonger who decides to die. T’Challa doesn’t have to kill him, even though Killmonger wouldn’t hesitate to kill T’Challa.

I don’t understand that bone magic that Killmonger uses to disable T’Challa. And then somehow T’Challa magically and mysterious breaks the hold and they are useless from then on. Okay.

I guess in the end T’Challa joins the Avengers and that’s all that matters.