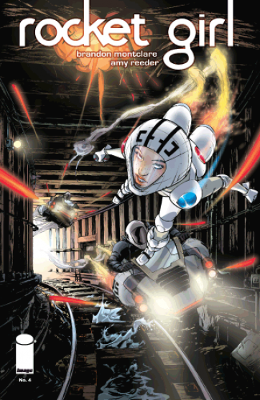 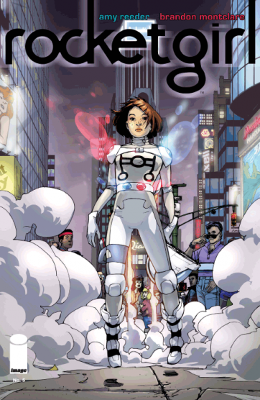 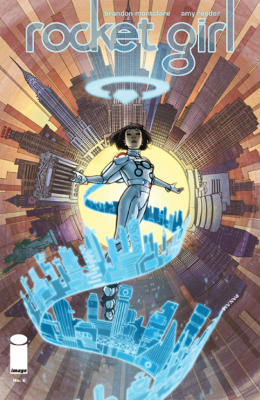 Due to its long hiatuses, I felt this book is suffering from a very intricate plot and me forgetting about half of it. And I know I can’t be the only one.

DaYoung seems to be fighting more enemies than just Quintum Mechanics from the future. Leshawn seems to also be over-the-heads in the future. And I’m not sure if it’s the art or if it’s the writing that makes the two realities seemingly melt together.

As much as perhaps we need the future story to show how DaYoung’s actions in the past have changed the future, I’m not sure that it’s currently helping the story. Like the first arc should’ve been just DaYoung being like, “whoa, the ’80s!”

Annie and Ryder are having some serious disagreements. This makes me think more than ever that Ryder is the one who’s in charge of Quintum Mechanics. Annie seems to want to put the entire project behind them.

I did the touch of DaYoung saying that she’s seeing stars and being thrust into Grand Central Station, where the ceiling is covered in star charts.

Interesting that the unnamed Quintum Mechanics controller just wanted DaYoung’s jetpack to go back in the past. Meaning that clearly, this tale isn’t done.

Even though Annie went through all the trouble of blowing up the q-engine. And she got arrested. But somehow, after DaYoung broke her out, they end up at Annie’s apartment without the police and without Ryder there…

I hope that Montclare follows up about what happens with the cop who meets his future self. I’m curious to find more about why all the NYPD adults now work for Quintum Mechanics. Hopefully, maybe we’ll get more story than from DaYoung.

Wow, I’d basically given up on this comic book ever coming back. Despite that both Montclare and Reeder said it was still an active title. However, I’m even more unsure that there’s ever going to be some kind of real wrap-up to all the mysteries. At least a satisfying one.

DaYoung seems much younger here in the ’80s. Even though she points out how young and impulsive Annie is. They are both young, but DaYoung’s true youth appears broadly. Not to mention, she has most all the flaws she points out Annie has.

I am curious how Natasha Tallchief plays into the larger story. Of course, the future universe is pretty much far less interesting and antiseptic.

Protecting everyone from everything seems like a very tall order, DaYoung.