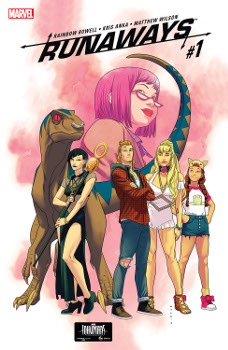 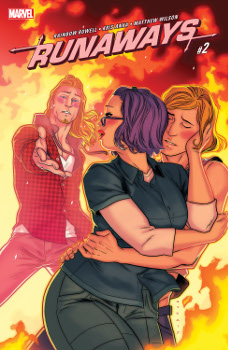 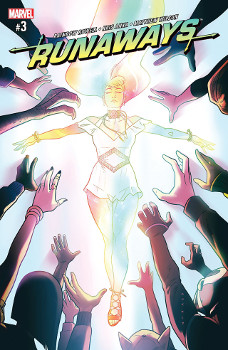 As a fan of the comics, I’m pleased that this continues them. That it includes Nico’s time on A-Force. (Also, nice joke there, Rowell.) That said, unless stores are stocking and pushing Vaughan and Alphona’s original series, I do wonder what stores offer Runaways TV show fans.

Aside, the Runaways TV show is probably my favorite superhero show. You should definitely watch it.

I’m not surprised they’d want to bring Gert back. She’s an incredibly popular character, and she’s someone who is an easy in for narrative. She is the geek girl. Of course, Chase cannot get over her death and goes to rescue her in that moment, but is too slow so she’s still fatally injured.

Broken Nico is pretty great. Seeing her struggle with her magic — one key difference between the show and comics is how the magic works — and it’s hard to see her confidence ripped apart.

I’m happy Rowell was hired by Marvel. I just hope they are going to actually promote this title more than expecting Rowell to do the heavy lifting and the TV show to sell copies.

The most exposition heavy issue I’ve read in a while. (Okay, that’s true, sadly, and I’ve read a couple heavy ones this very evening.) I get that those coming from the Runaways TV show and those who haven’t read a Runaways comic since Vaughan/Whedon/Moore might need catching up. Hell, there were a few pieces I didn’t know about either.

The argument between Gert and Chase was a little too much. It could’ve been shortened. It isn’t like anyone was going to rekill Gert.

Gert is our audience stand-in here. I’ll be curious to see if Rowell continues this as the series goes on.

My very favorite part was when Old Lace shows up. It’s magical to see those two together again.

The cats are creepy. Even I liked that Molly calls them her audience for her soccer playing. I do agree with Nico that it’s not necessarily the best thing to take Molly away from her grandmother. (I was surprised that the book didn’t cover the differences between the comics and the TV show and familial relationships here.)

I wish I was feeling the vibe of this book. I did like this issue a bit more than the last. Karolina dancing in her dorm room by herself felt just perfect. Anka’s design creativity very much shined through. And Karolina often serves as a voice to the heart of the matters at hand, and Gert’s very much right that she’s needed as part of the family. Somehow, I think she will eventually join them.

I’ll be curious to see how Rowell continues to play with Gert’s age. She is much younger than them now. (Will she and Molly be the same age?) And yeah, I can’t imagine how she feels about Chase since they really shouldn’t date due to their age differences.

Victor getting tossed in the bag as he was rebooting was kind of funny.

Nico’s been in other comics, and it doesn’t seem like Rowell knows what to do with her here, except to be a grump goth.

Molly may be this book’s first mystery.