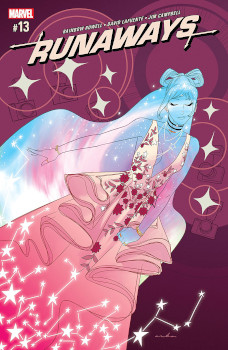 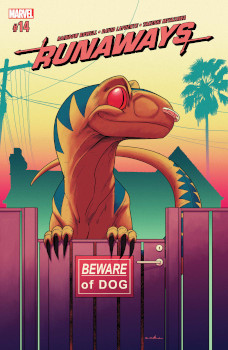 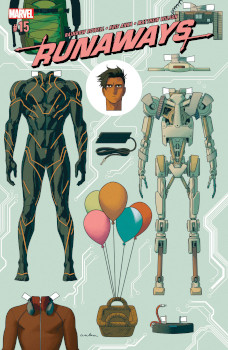 Lafuente’s art is too blocky for me. It’s not bad per se; it’s just not a style I’m fond of. I’m looking forward to Anka coming back on pencils in future issues.

Alex — okay, yes, Rowell used him to effectively convey that the Runaways need someone to get them information. You’d think maybe Victor, the head, could’ve used some of his Avengers training to do that. But nope. Here we are.

There is still the mystery of how he escaped hell. But I’m not sure if I’m interested in learning. Comic book Alex was left as a pretty irredeemable character, even if here Rowell positioned him as someone who just really loved his parents, and well, we can understand that.

The Gibborim were…yawn. Unless we’re talking Wonder Woman, most gods in superhero comic book plots bore me to tears. At this point, this plot could go anywhere.

More stories from Old Lace’s point-of-view. Seriously, that was by far the best part of this issue. I love Old Lace — who is kind of like a big dog, but also a dinosaur who’s connected to Gert.

My favorite Old Lace part when she went to protect Molly, but then Rufus bit her tail. The images of Rufus as the devil (Old Lace’s mind) and as an angel (Rufus’ mind) as Molly got mad at Old Lace was perfection.

I liked how we saw bits of emotions Old Lace got from Gert and bits of her own personality. Plus, Miyazawa’s art was so expressive and enjoyable.

The main story — well, the last issue I didn’t pick up that the Gibborim were the kids of the ones the Runaways’ parents worked for. The good news, I guess, is that they aren’t very powerful due to the lack of worshipers and soul sacrifices.

Good thing Chase kept all those books. You should never throw away the books, even if what’s in them is evil.

That was a dumb decision by Nico. But this was a fabulous issue.

As Rowell merges aspects of the TV show into the comic verse, we learn that the Staff of One is a powerful magician captured and turned into a weapon by one of Nico’s ancestors. When the Earth aligns with Mars, he comes into being to eat pancakes and beg the current Minoru to free him.

Of course, he is evil, and while Nico does want to free him — because she doesn’t want this power — she does realize that in doing so she’d actually release a villain into the timeline.

However, the decision to change how the blood spell works will result in him taking over Nico’s body with his blood. I’m surprised she bought into this because he basically tells her what will happen, even though she’s so sure that she won’t do 100 spells.

I hate to say that Alex is right, but he’s right about them needing actual training. There has to be some more creative way to train Nico than to have her use up her spells. And they do need to figure out how to fight Gib and his pals.