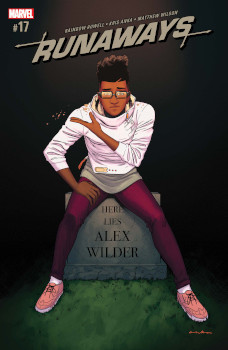 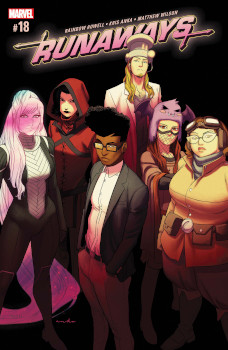 I’m not a Christmas fan, but I am always a fan of holiday episodes of TV shows, and apparently, comic books fit that bill too. There were multiple times during this issue that I laughed out loud. And okay, yes, it was the parts about them planning a murder on Christmas and on it being a Latvarian Christmas after all. Also, Victor being Catholic.

The holiday decorations and sweaters were ridiculous. But that’s a holiday for you. Old Lace did look especially happy to be wearing that wreath around her neck. Rufus may not be as thrilled with stuff on his tail.

As predicted, without having to cut herself, Nico seemed a little freer with the spells. Which means she’ll be using them more than ever. But, on the other hand, they did need to eat. They ran out of food, and you kind of break the whole secret hideout thing if you Postmates or Amazon Fresh something.

They keep finding ways to break Gib’s rules — this time letting the Doombot in. It seems like they don’t need to try that hard to stop the ending of the world.

Alex will definitely channel all that power into himself. No doubt about it. Also, Chase isn’t going to investigate Alex’s comment about not having to eat since coming back from limbo — not weird, Chase?

I appreciate the joke being that the Gibborim are Gib, Bo, and Rim, and that there was a miscommunication on their elder god names.

Everyone has many changes of heart here. Gert on if she should go back. Gib on sacrificing humans and how they are much more than chattel souls. Everyone on following Alex’s plan.

Somehow, I very much think it was Alex’s plan all along to sacrifice Victor. Indeed, they don’t know if he has a soul. But still, it seems like in Marvel’s rules, he’d have one.

Once again, not a fan of Anka putting Karolina in weird workout clothing. Crop tops aren’t my favorite thing ever, and here there are no favors even for those who are drawn.

Victor’s new body is just weird. I’m glad they put him in some clothing because he was too Terminator without them. If we’re going to have Gert get sentimental over her affections for him, he should at least not look like a infamous killer robot.

Besides Nico’s boob-star-window — which I wore some stuff like this when I was younger *cough* — this issue felt very anti-climatic. It made sense that they defeated the Gibborim kids. Narratively Rowell couldn’t just let Gert keep a time machine around, and there’s no way Alex is anyone, but Alex. This might’ve been my least favorite issue of the series so far. It was just boring. I’m not even that curious about who went with Alex, though Molly would be my guess.