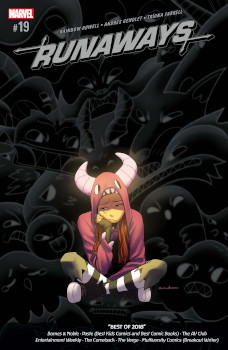 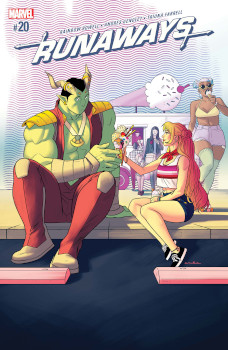 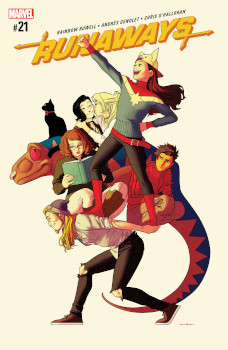 And it was Molly!

It’s very child-like that Molly would assume the others didn’t have the same mourning feelings for their parents and any desire to be reunited with them. Alex may wear his on his sleeve, but no doubt, all of them have moments of missing their parents. As someone who has an abusive parent, it’s not like I don’t ever miss them, or that every memory I have of them is terrible. Sometimes those good moments are more painful than the bad ones, and I hope that Rowell expands on this discussion.

Genolet is a great choice for this book. I don’t think I’ve ever read anything with their art, but they’re an excellent choice for a YA book. I do really enjoy their layouts and how they play with space. Many of the panels are portrait orientation, and it fits the world of 2020 in a relevant way.

I also really enjoyed their design for Alex. Here, Alex seems to be androgynous, which is a great look, and personally, I think it would be a great addition to his character, if this were pushed further from Rowell. Having a non-binary or agender character would seem fitting for the Runaways, especially since Xavier is no longer on the team.

It seemed very Marvel brand to have Alex’s mom put such good booby traps all over their home that even the police have just left the place alone. I wonder how many properties in the MCU have just been abandoned because of villains doing something similar.

Kids will eat gross things like canned chili and pineapple together.

Except for the part where they mention Molly coming back from her runaway with Alex, this issue seems like it would’ve better fit before the last one. Or at least before Molly ran away.

Most of this issue focuses around Victor and how he dreams about Gert’s death over and over. This fear leads him to hop into a tub and start growing a spine. Which I assume is him finally growing a new robot body so he can fight better for Gert.

There’s jokes about how Gib won’t eat anything, and Old Lace is put in charge of making sure Gib doesn’t eat anyone. This seems like a problem they will need to solve sooner rather than later. This isn’t a comic like Monstress where it fits the tone that a lead character eats people.

Meanwhile, Chase has a lot to do, including home repair of maybe a load-baring wall. And Karolina may get herself kicked out of college since she hasn’t been attending and all freshman must stay in the dorms. Boring. Though I did like Karolina’s roommates’ Hawkeye t-shirt.

Mostly, this was a rather dull issue.

Who would’ve thought that an entire issue focused on Chase would be this awesome?

All of Chase’s flirting with Van was brilliant. He’s in a sensitive place, and he’s used to being around a lot of women. (I did wish that Genolet put bad puns on the tampon and menstrual cup boxes.) And I’m glad we finally figure out that they’re feeding Old Lace dried cat food. It makes some sense given carnivorous dinosaur and cat diets.

Van was utterly right that Chase should’ve said something earlier about being in a relationship, or an “it’s complicated.” I have a feeling Van will get a call, or another visit, next issue.

Karolina’s therapy session just made me think about how much I need therapy right now. So relatable content? “I feel like I’m going to have to give up all the things that make me happy just to have enough energy for all the things that keep me sane.”

It was beautiful to see Karolina save a little girl, who she was previously watching and feeling sad about how she didn’t get the same level of love and affection as the girl was receiving from her parents.

The raccoon on Molly’s bedroom door telling them “not now” was perfect. Great job, Genolet.

Similarly, the talk between Molly and Chase was top work from Rowell. Such a delicate balance of the genuine issues of how Molly fears she’ll be abandoned again. I don’t know how I feel about nothing happening with Alex, except that Molly figured out it wasn’t right for her.

And Victor has a whole body to use to kiss (and save) Gert.