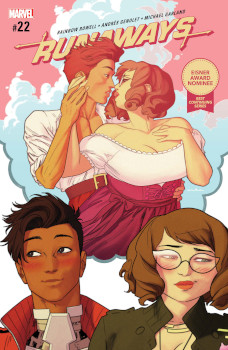 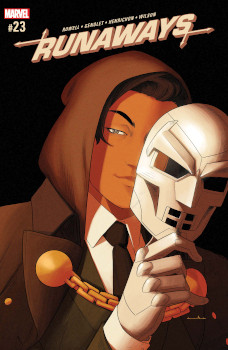 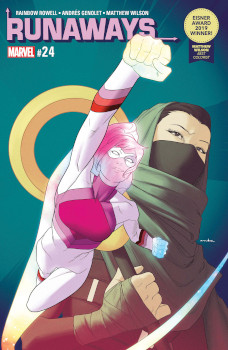 Oi, not a Doom story. Doombot and Dr. Doom are a snoozer for me. Plus, seems like there’s some important stuff to cover like Gib’s food needs and Chase flirting with the shop girl.

Karolina and her mask crusade stuff to make herself feel better, whoa, do I feel her in this. I love Rowell’s acknowledgement that Karolina’s flying powers do not make her super strong. She’s going to have to start lifting some weights and learning how to fly with people. (Which I feel she’s done in the past, but perhaps not very much.)

Nico and her are certainly a little off-kilter. There are some conversations they haven’t had about the staff and about what Karolina’s doing. Or even her schooling issues.

I guess it’s okay that Chase is upset about Gert kissing Victor. I mean, she certainly should’ve had some kind of conversation with him about the status of their relationship. Kissing another person is not the reveal you want. But, at the same time, Gert’s 16, and even if she seems mature, she’s still 16. (I’m not sure how old Victor’s supposed to be, but I’m going to guess around Gert’s age. Even if he’s a robot, so maybe he’s a baby!)

Rowell does a tightrope act with Chase’s feelings, and while Chase certainly has framing about how soon she’ll be of age, if they were actually together, I’m not so sure he would be that patient for her to grow up. Because Chase himself is still an adolescent, even if he’s technically and legally an adult.

I don’t know why Karolina thought she could superhero, and no one would notice. It was kind of nice that Nico was the first one to discover this. They need to stop acting like Nico using her powers won’t ever have consequences. (Of course, it can be argued that it will only have consequences if Rowell continues on this book.)

The holding pattern in this issue felt a little stale. We still need to get Gib something to eat. Both Victor and Doombot are unconscious and robot healing.

It was hard to care a lot about Doombot. He’s not one of the main set of characters. While I get that Victor’s words were actually about himself and what he’s going through, their dialogue was the least interesting. Though the layouts from Genolet were clever, and that the art was a standout.

Speaking of art, Molly laying out her stuffed animals around Victor and Doombot’s bodies, plus covering them with her comforter, was sweet especially since neither of them will actually experience coldness.

Gert and Chase’s conversation was a long time coming. It shows how young they are in that they never sat down to hash out how their relationship might work. I don’t think either of them ever planned on not being with the other — life just happens, especially when you are a significant age difference where you cannot be together. The age gap won’t matter when they are older, but it matters now. I’m pleased with how Rowell’s handling that.

This issue hinges a lot on how cute you think Nico and Karolina are. I do love their new crime-fighting costumes. They fit their personalities so well.

I thought Gert was a vegetarian. I guess not. Maybe she cannot be because of Old Lace.

Nico and Karolina out on their date, and looking for a crime situation was cute. Until they found actual criminals, they were more on a date than on a mission. I like them together. However, this was, unfortunately, another example of how superhero comics confirm the existence of police. It seems odd that they wouldn’t be looking for crimes or dangerous situations not reported to the police.

The criminal gang, boring, even if Rowell tried to make it cute with Nico’s dancing spell.