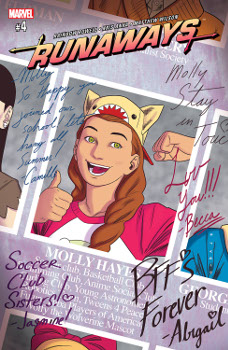 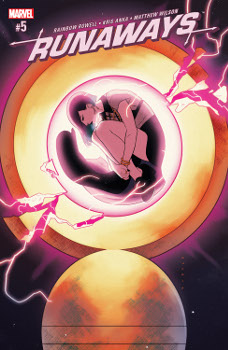 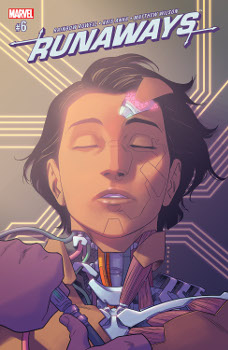 This was the first issue that I felt all the pieces about this group were truly here. There was the family connection — one made ironically by Grandma Dr. Hayes. There were bonding moments, and just hanging out moments. Sure, mystery happening and Victor continuing to act as if he still isn’t working… (Of course, Molly figured the latter out.)

Speaking of mystery, the powers were definitely made by Grandma Dr. Hayes. If Molly’s dad came to live with Molly’s mom when they were still kids, Grandma Dr. Hayes had something to do with their powers. In fact, Molly may be the ultimate outcome of her experiments. Which she also seems to be doing on her cats.

Wow, did I identify with loving cats way too much too. Of course, my only experiments on mine are to get them to stop fighting.

With every issue, Anka’s customization of each character’s styling becomes more prominent. I loved Molly wearing Captain Marvel socks and Nico dressing like a queer girl from the Pacific Northwest in the 90s, flannel and docs and fishnets.

I like of hope Rowell plays with Grandma Dr. Hayes and doesn’t make her out-and-out evil. You kind of expect it, given how all their parents were. And you know, if they need to run away…

Runaways has definitely hit its groove. I left this issue wanting to read the next one, and that’s always a great sign. And the key groove: they are running away.

Although let’s be honest. The only ones who actually have to run away are Molly and Gert. Mostly Gert so Molly’s grandma doesn’t experiment on her.

Okay, maybe Karolina is running away from her college and her girlfriend. She doesn’t seem very happy. She and Nico are basically the depressed lesbians. For the most part I like Anka’s art, but the way he draws depressed Nico, she’s so small and I want her to come into her powers.

Victor scaring Chase was pretty great. They are going to need to get Victor a body soon as this strapped a head to you shtick isn’t going to be very funny for long.

I do hope that they run away to Disneyland, at least for a day or two. Gert’s parents were evil for not taking her as a kid, especially since they lived in LA. (Mine only had a little bit of an excuse, but still evil.)

Of course, Grandma Dr. Hayes figures out their plan anyway. But just in time the others show up.

The stakes were high enough with Molly not wanting them to hurt her grandmother or her cats; Rowell didn’t need to bring a clone of her mother into the picture. Though it certainly showed how perhaps they really do need to call the Avengers and have them deal with Dr. Hayes.

While many aspects of it were good — such as the actual running away and the voting and not agreeing on everything were great — the entire issue felt rushed. It could be the nature of battles that take all issue. However, the art was also scant. There were very few backgrounds, and the night/dawn setting was used to do that. However, you’d think, since this art is digitally done, that there could’ve been more reusing aspects of Molly’s bedroom considering that was where most of the action was.

I believed in Rufus and his goodness. Ewww…Old Lace.

I do wonder where this home they are heading to is. And again, it’s not like they can totally drop off the map with Karolina in school and them having Avengers connections.