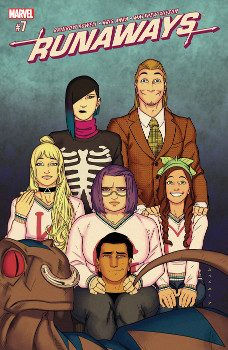 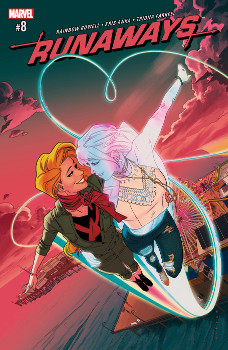 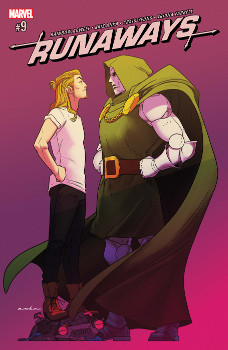 I guess a spell was the best thing to do to make it so Molly could continue to attend her school and hang out with her best friend, Abigail. Like I get it, but also she’s runaway before, she knows the drill. This school situation will come back to bite them in the ass.

Nico’s comment about wasting all her hairstyling spells in the first week of having the staff was pretty great. Same with Gert being so bored that she’s teaching herself to cut hair and using Victor as her model. The conversation about bodies was nicely layered into the story.

Abigail is trouble, one way or another. Her parents were significantly older than Chase and Nico, and I’m curious if there will be more about that. Or if Anka and Rowell were trying to over-communicate how young Chase and Nico are and how they could never be Molly’s actual parents due to their ages.

I’m not sure if I’m a big fan of how Anka draw’s Karolina. He draws her very sporty. I’m okay with him trying to mature her look, or move her away from 90s hippie, but there’s something off and not entirely flowing for me with her look.

This gag of Chase being the dad is pretty funny. Though I cannot wait for it to get more uncomfortable for Gert. Especially since he was always so immature in those early comics.

On the one hand, Abigail’s storyline is fascinating. I want to know so much about her and her life. There seems to be some obvious Alice in Wonderland / Peter Pan vibe. On the other hand, Doctor Doom is incredibly dull, and I feel like we’ve already been there with Victor.

The one thing that rocked this entire issue was Anka’s art. It was top-notch. While I previously wasn’t feeling the depiction of Karolina, the contrast between her and Julie was perfect. Karolina is California sunshine, and Julie is New York artsy. I especially love the cover with the two women.

Abigail has certainly hooked Molly. Though what Abigail doesn’t understand — even with all of her years of wisdom (why does she go to school still?) — is that Molly already has a family. She already has people she relates and identifies with. Though I cannot imagine Abigail is the only forever young character in the Marvel universe.

Doctor Doom, what do I have to say besides…yawn. Not to mention, he’s calling a lot of public attention to them again if they are attempting to hide out. I hope this plot leads to Victor having a body again.

One of the weakest Runaways issues so far in Rowell and Anaka’s run. Both the story and art were suffering here, and it seemed to be deadline-related. At least that’s what I always assume on monthly books when they are typically otherwise pretty good.

The writing itself felt pretty clique. The plot being a Doombot, who’s an Avenger in another book (with Victor), was only slightly better than Doom himself. At least, it meant we didn’t have any more fistfights or watching Nico be discouraging about how badly they are fighting as a superhero group. Chase and the Doombot arguing about “fixing” Victor, who doesn’t want to be “fixed,” seemed heavy-handed.

But the most heavy-handed plotline was Molly’s choice over eating the cupcake and staying 13-years-old forever. Of course, all the adults come home and tell her cliched things about how great it is to be youthful — whether that’s not having to work a job or not having complicated romantic relationships. (Also, newsflash, turns out you can have deep platonic friendships at any age, and oh yeah, some people are asexual.) Not to mention, everyone handing her (non-magical) cupcakes to eat.

The only part of the plot I did like was Julie eating the cupcake and turning into her 13-year-old self.

As for Anka’s art, it felt dashed together. There were barely any backgrounds — which seems more important as we are establishing the Runaways and their new home.