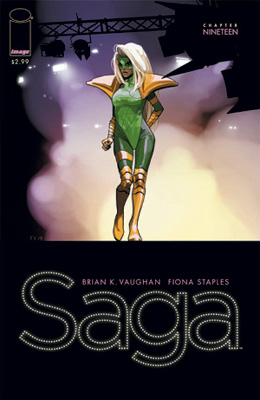 And Alana is prone to escapism. When the Open Circuit acting role doesn’t stick, she ends up taking drugs from Yuma. Another distraction.

Klara mourns and involves herself in reading novels. But they can’t bring back the dead anymore than Marko and Alana may be able to save their marriage.

Prince Robot IV is also distracted with whores when his son’s born and kidnapped. No one cries when Mama Sun dies. Robot IV’s always also one step behind. I do wonder if Marko will lead him down a road to even more incompetence. Or may some backstabbing or forgiveness at a price.

Dengo’s story is perfect because it is so ordinary. Even he says that his son’s death was a common one among the poor people.

Izabel will probably never be taken seriously. Alana certainly isn’t going to listen, but that was some nice backstory for Izabel. And also a lampshade to why Izabel really doesn’t care about having a real afterlife, as it were.

I’m hoping that it won’t be the cavalry — Marko and Prince Robot IV — who save Alana, Klara, Izabel, and Hazel. Either they need to do something themselves or accidentally run into The Brand, Gwendolyn, Sophie, Lying Cat, and the Sidekick. Loved Sophie saying that the Sidekick smelled like garbage water. (And I’m so glad Lying Cat wasn’t hurt! More Lying Cat next time, Vaughan.)

When Saga slows down, the characters have time to think. Follow them and buy Saga Volume 4